What is the best way to teach a horse to remain patient and quiet when tied?

“What is the best way to teach a horse to remain patient and quiet when tied?-Joann L.” 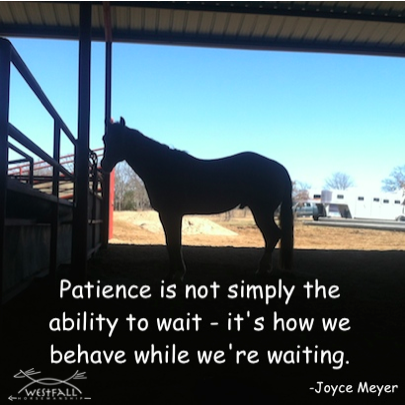 If you are referring to a horse that digs holes, moves around and calls for friends; most of the time the answer is ‘more of it’, meaning they need to be tied more. Lets look at Newt, shown here in these photos, as an example.

Newt has been trained to tie from the time he was a weanling. He had all of his groundwork done and he spent the first two years of his life living in a pasture with other horses. He was tied on-and-off during this time. He is lazy by nature.

When I started training him under saddle at the age of two I would tie him for about an hour after each work session. This was generally in his stall. He was pretty normal meaning; he did some pawing, as evidenced by the bedding being moved, but this went away within a couple of months. Sometimes I would tie him in the indoor and when the weather was warmer I tied him outside after working him. These locations made him more likely to paw.

Newt started being hauled more when he was three and four. That is where he excelled at pawing. From the time he was loaded until the trailer moved he would paw. He would stop pawing when the trailer moved…but you could feel him resume if you stopped at a light. It became a running joke because the boys started ‘pawing’ in the backseat of the truck in imitation. 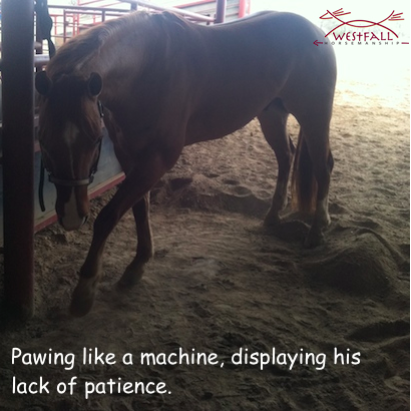 To combat this I wouldn’t unload him until he took a break. Sometimes that meant I would leave him on the trailer for 30 minutes or more after I arrived at a destination. I also learned to load him on the front so we could unload everyone else while Newt stayed behind for ‘training’. I still continued tying him in the stall or around the property after workouts. The pawing didn’t happen at all in the stall, was slowing down when tied in different places but was still there in the trailer.

Newt is now five. When we moved to Texas I went on a mission to stop the pawing. Some people say you can hobble them or put chains on but I wanted to get him to mentally choose to stop. I wanted him to learn patience. Newt is hobble trained because I wanted him to know that skill but I chose not to use it during these patience lessons.

Newt was turned out with other horses more after moving to Texas, which I like, but it aggravated the pawing some. Because he was turned out instead of being in a stall I also lost the ability to tie him in his stall after a workout. Maybe that added to the pawing but either way…Newt was on a mission. It was almost comical to watch because he would diligently begin digging, you couldn’t have trained one to have this kind of rhythm. I learned to ride him early so he could stay tied longer. I even tied a rope in a tree so I could tie him in different locations after his daily workouts. Some days I thought he was improving, other days- not so much. 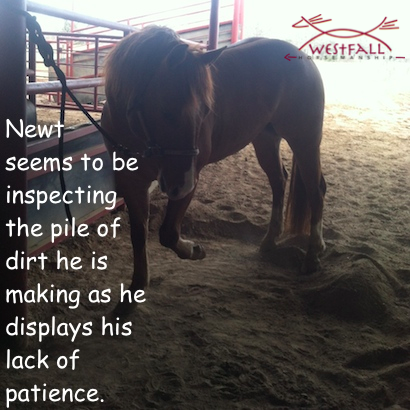 On top of this I happened to start hauling him a lot. He was hauled to Texas in February. Hauled round trip from Texas to Ohio and back in April. And round trip from Texas to Ohio and back again in May. Each one way trip is just over 1,100 miles, for a grand total of 5,500 miles. In between hauling I was still riding and tying him out. By May I noticed a huge improvement everywhere; while tied out, at shows and even in the trailer he was pretty much not pawing.

Now he pretty much doesn’t paw. I just had him tied yesterday because I saddled up and realized that lunch was ready. I tied him, saddled, in a strange barn away from all of his pasture mates. The surface was sawdust, making it easy to see if he pawed. Nothing. He was tied for an hour and looked like a pro. I joked that if I wasn’t careful he would be mistaken for one of the camp horses and be headed down the trail before I got back.

Most horses aren’t this diligent, but some are. Work and time are my favorite training methods for this. Also being aware of when you are untying them is important because untying them is a reward.

It is also interesting to note that horses can regress in this area also. Popcorn was excellent at this but I haven’t been riding him regularly and he has become fond of his pasture mates. He was tied in the same sawdust floor yesterday and dug a nice sized hole by the time I got back. Can you guess what I have planned in his future? 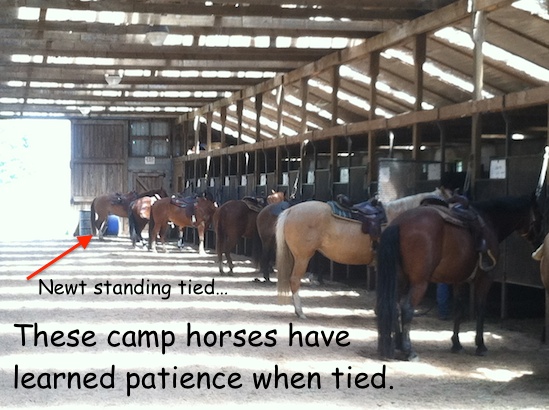