Mistakes and lessons that can be learned from spurs… 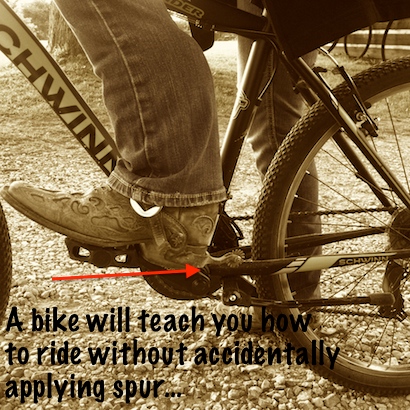 Sometimes riders will turn their toe out and poke the horse on accident…a bike is not so forgiving.

While riding my bike to the barn, I was reminded again of how important it is to know where your spurs are at all times. I wear my spurs while walking, driving, and of course riding but recently I have added bike riding to the list also. Really I’m just being too lazy to walk BUT maybe there is a lesson hidden in this ‘bike riding with spurs on’ thing.

Know where your spurs are at all times.

Often people will ask me if they should wear spurs. The first consideration is your horse. Would your horse benefit from them or not? Remember spurs are for refinement…which means that both horse and rider need to be in this stage. I wrote a whole article titled “When and why to use…or not to use…spurs” if you want the full story.

And all this talk about spurs reminds me of a blog I wrote titled: “Spurs and underwear?…weddings…Walmart…Your stories have mine beat!” which is so funny that I am going to share it again here. This was first posted in December

I never thought twice about wearing my barn clothes to down… one day while grocery shopping I noticed quite a few people staring at me but figured it was the spurs. I was close… on my dash though my (messy) bedroom before heading to the store I snagged a pair of underpants on my spurs and were dragging them through the store….-Kim V

I love the spur stories – here’s one I’ll share. I am a veteran of the Royal Canadian Mounted Police. My wife and I were married in 1968. I wore my “Service Order #1″ which is the red serge, breeks, boots and spurs, to the wedding – standard procedure. During the ceremony I stood at attention with my heels together and toes apart – normal military “at attention” position. By accident, I crossed my spurs – didn’t realize that had happened until I stepped off after saying “I do”. Fell flat on my face in front of my bride, the guests, the preacher, and 31 other Mounties. Highly embarrassing, but on the up side, we’re been married now for almost 46 years! -Ross M

After a fun morning playing with my mare and her filly with alfalfa cubes, I ran to Walmart (of all places) for A few groceries.I looked like a hobo and smelled like a barn (filly spit) I had put cash in my pocket and when I paid the cashier loose alfalfa (from the cubes) fell on the counter…I apologized but the clerk madly swept up the bits of alfalfa and stated in a panic, “baby your bag done broke” “OMG no…it really is alfalfa,” I insisted. She winked and tried to give me the loose hay back…I left the store quickly and never went back. -Marj G.