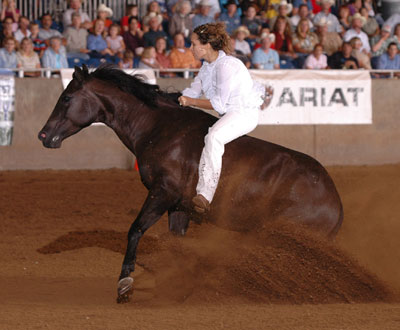 Many will best remember Roxy from a video that went viral on the Internet in which Stacy rode her with no bridle or saddle, winning the Freestyle Reining Championship at the 2006 American Quarter Horse Congress.  The performance, coming less than a month after Stacy’s father passed away, touched an appreciative audience worldwide.  One person quite moved by the ride was TV personality Ellen DeGeneres, who invited Stacy and Roxy to appear on her show.  Roxy, ever the lady, gave Ellen a memorable ride, and charmed the live studio audience by coaxing peppermints from Stacy. 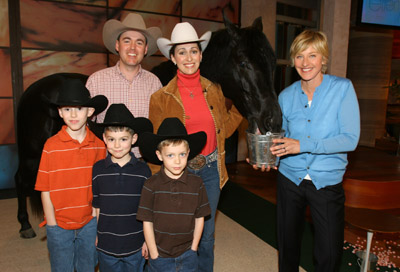 Roxy first came to Stacy and her husband, Jesse, for training as a two-year-old.  “I was the first one to ride her,” Stacy recalls.  Not long after her arrival, the Westfalls had an opportunity to buy her, but couldn’t afford to.   “One of our other clients had asked us to keep an eye out for a good horse, so when we couldn’t get Roxy, Jesse suggest he should.”  That client, Greg Gessner, bought Roxy and kept her in training with the Westfalls.

“It was the perfect partnership,” Stacy says.  “Greg believed in us — in Roxy, and Jesse and me.  There aren’t many owners who would let a fairly unproven trainer do something as crazy as ride in a competition with no bridle, let alone saddle.  But he always wanted what was best for Roxy.  He loved her.” 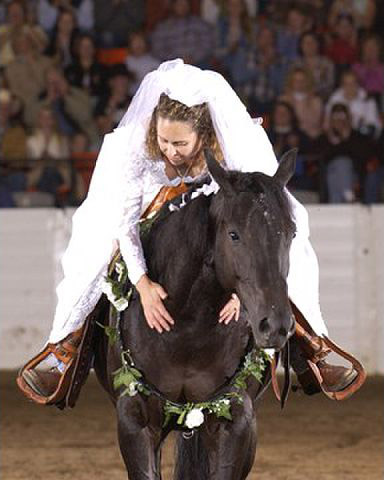 And Greg never looked back.  “I truly feel blessed by God to have Jesse and Stacy in my life working with me and Roxy.  I never once doubted their abilities or judgment.  And while Roxy was my horse, it was always clear she loved Stacy.”

Roxy was ten months pregnant carrying her first foal on the night she had her mishap.  Greg had her scheduled to move to a foaling facility in time for her early March delivery date, but since the move had not yet happened, she was in a large foaling stall at home.  It was Greg who discovered Roxy in her stall early on the morning of Feb. 6.  Although she was standing, she was favoring one back leg, and her nose and one knee had abrasions, most likely from the struggle to get up after having laid down.  The stall showed signs of that struggle.

Greg called Roxy’s vet, Dr. Curt Honecker, who stopped by and began administering medications.  As the day progressed, and Roxy’s discomfort grew, Greg and Dr. Honecker decided to take her toValleyViewAnimalHospitalinDover,Ohio, where Roxy is well known and loved by the staff.

“Ever heard of the saying ‘You get one good dog in your lifetime?’  Well I think Roxy may have proved that true in the horse world. She truly was a once in a lifetime horse,” says Ashley McCahill an equine receptionist at Valley View.

Over the course of the next couple of days, Dr. Honecker and the staff did their best to make Roxy comfortable.  Sadly, the tearing and shredding of the ligaments and muscles that occurred when Roxy struggled to rise was causing dramatic swelling in both flanks and upper stifles.  Even in a sling, with morphine in her system, Roxy was unable to stand.  Recognizing her rapidly progressing condition and severe pain, Dr. Honecker and Greg chose to humanely euthanize her.

“It was a hard to make that decision,” says Greg.  “But she didn’t deserve to be in pain.  Knowing it was the right decision made it easier.”

The Valley View staff did their best to save the little, sorrel stud colt she was carrying, even though he was 30-days premature.  They performed a C-section, but after two hours of oxygen support, the colt failed to respond and was also euthanized. 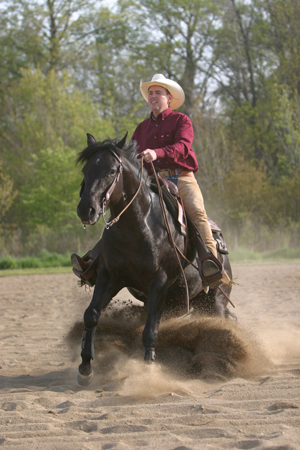 “I would have expected this mare to outlast my career,” Dr. Honacker says.  “We’re going to miss her.  Staff and visitors used to sneak back to have their pictures taken with her.”

A registered American Quarter Horse, Roxy (by Whizard Jac out of a daughter of Gunners Rambo) leaves behind a legacy of four offspring, all of whom were carried by recipient mares.  But perhaps her greatest legacy is the glimpse of what is possible between a horse and a human — the image of she and Stacy, forever imprinted in the minds of those who have been lucky enough to witness them — two creatures, human and horse . . . bound by trust and love.

“What made her special was that she was willing to give so much of herself,” says Jesse Westfall.  “She allowed herself to be developed into an amazing partner, a work of art.  Not many horses, or people, are willing to do that.”

Roxy will be greatly missed by many; the Valley View staff, Greg Gessner, the Westfall family and all those inspired by her big heart. 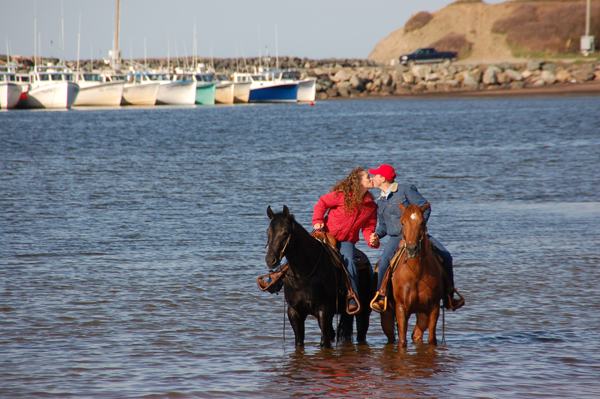 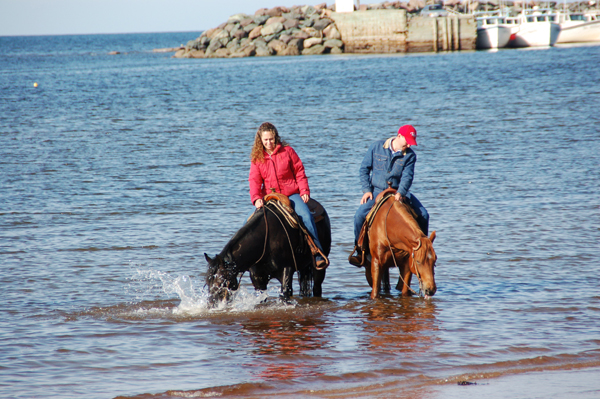