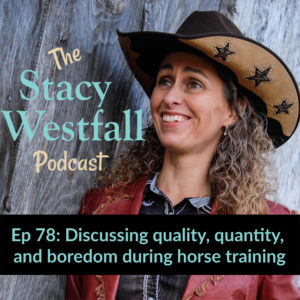 Ep 78: A listener called in a question about training her first two year old. She is struggling to find the balance between quality vs quantity and also a concern of causing boredom during the training process. Stacy explains her views on finding a balance between quality and quantity beginning with the idea that quality always matters and quantity is often part of ‘seasoning’ a horse.
Stacy also explains her view that boredom is GOOD for horses…but that the caller may be confusing signs of frustration or confusion with boredom.

SWS078.mp3
[00:00:03] Podcasting from a little cabin on a hill. This is the Stacy Westfall podcast. Stacy’s goal is simple to teach you to understand why horses do what they do, as well as the action steps for creating clear, confident communication with your horses.

Goal Setting and Problem Solving course with Stacy Westfall & Ginny Telego :A Step-by-Step process to uncover your best ideas and overcome the challenges you will face as you take action to achieve them