Episode 187: The backward cycle of learning; after, during, before 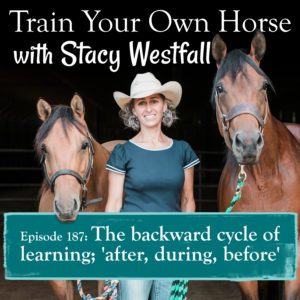 Wouldn’t it be nice if you could just read a book or see a demonstration once…and just do the new thing with ease?
The reality is often quite different. I would even go as far as saying that the process is backward from what we desire.
Take the example of changing a current habit, where you release the rein, to a new habit…a slightly different release point.
First, you must gain awareness of the new release point. Maybe an instructor or a video suggests this change.
When you go out to practice…you will often realize AFTER you have missed the timing…that you were late.
Eventually, with practice, you’ll get closer and closer to the timing, maybe you’ll even notice DURING…but you’ll probably still notice you’re a moment late.
Then, with enough practice, you’ll see the proper timing BEFORE the moment approaches…and you’ll release with perfect timing.
The challenge is that both the ‘after’ and the ‘during’ stages feel like constant mistakes. And you can choose to view them that way, or you can view this as the practice you need to finally achieve your new habit.