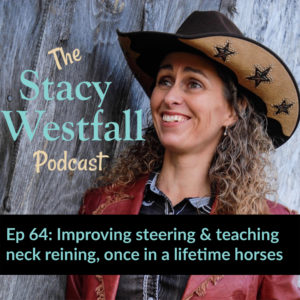 The Complete Guide to Improving Steering and Teaching Neck Reining is here!

My newest teaching course releases today and I’m really excited about the content. It’s my best teaching yet. I explain the stages of training that horses go through and the techniques and patterns that I use.

To save you time, I’ve edited the information into short videos, printable PDF’s and even audios, similar to this podcast, that you can ride and listen to. I’ve made it easy to navigate so you can find exactly what you want to study.

Later in the podcast I discuss the idea of ‘once in a lifetime’ horses. I’ve had three so far…at least in the public view. What does that mean?

And finally, I update you on my horses. I discuss getting started again after a break, Where I feel the ‘loss’ the most and the concept of finding the ‘holes’ in a horses training.