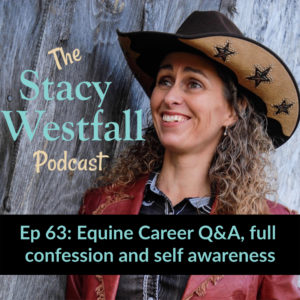 In this episode, I make a confession about how much (or not much) I have been working my horses, I discuss self-awareness and I answer 12 horse training/career questions for a young lady who wrote in.

SWS063.mp3
[00:00:03] Podcasting from a little cabin on a hill. This is the Stacy Westfall podcast. Stacy’s goal is simple to teach you to understand why horses do what they do, as well as the action steps for creating clear, confident communication with your horses.