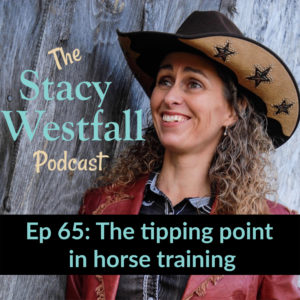 What is a tipping point in horse training? Why does it matter? How would it help with spooking?

I also discuss Resistance (a reference to Stephen Pressfield’s book) and my new course, The Complete Guide to Improving Steering and Teaching Neck Reining.

SWS065.mp3
[00:00:03] Podcasting from a little cabin on a hill. This is the Stacy Westfall podcast. Stacy’s goal is simple to teach you to understand why horses do what they do, as well as the action steps for creating clear, confident communication with your horses.

Book on Resistance: The War of Art by Stephen Pressfield

Stacy’s podcast on horses learning how to learn: https://stacywestfall.com/episode-27-horses-can-learn-how-to-learn/