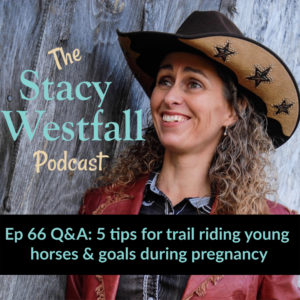 Question #1- “My question for you is how you can tell when your horse is ready to go on its first trail ride. What kind of skills do you like to have in the arena? And then what do you practice on the first trail? Right. How do you know when to call it quits and what are your goals on your first time going out?”

Question #2- “My question is about balancing training your horse, being a mom and also being pregnant. I’m on my second pregnancy now and I’m just going to get it extremely hard to work with my horse regularly. My last pregnancy, when I got too big to ride, I did groundwork but I feel like they got really bored. I’m just wondering if you have any more ideas or what you did to make it more interesting for them and what you did.”

SWS066.mp3
[00:00:03] Podcasting from a little cabin on a hill. This is the Stacy Westfall podcast. Stacy’s goal is simple to teach you to understand why horses do what they do, as well as the action steps for creating clear, confident communication with your horses.