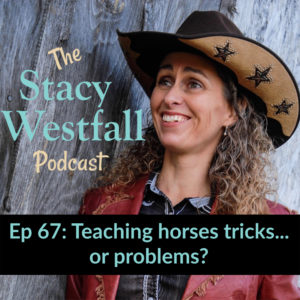 Can training horses to do tricks like rearing, bowing or lying down cause problems? I answer this question by using examples of six different horses to illustrate my answer…which is sometimes yes and sometimes no.
I also explain how I decide which horses are better candidates than others…and how timing does matter.

I discuss a comment left on the show notes of the last podcast and expand a bit more on the idea of dismounting as a way to avoid problems.

In keeping with the seasons theme, ‘What’s going on in my barn.’ I also take you behind the scenes and fill you in on the training progress with Willow, Gabby and Presto.

SWS067.mp3
[00:00:03] Podcasting from a little cabin on a hill. This is the Stacy Westfall podcast. Stacy’s goal is simple to teach you to understand why horses do what they do, as well as the action steps for creating clear, confident communication with your horses.