I have received many questions involving bridling a horse. I could answer each one of these questions individually, and I still may at some point, but I have chosen to present them all here in an attempt to illustrate the power of having an entire program. 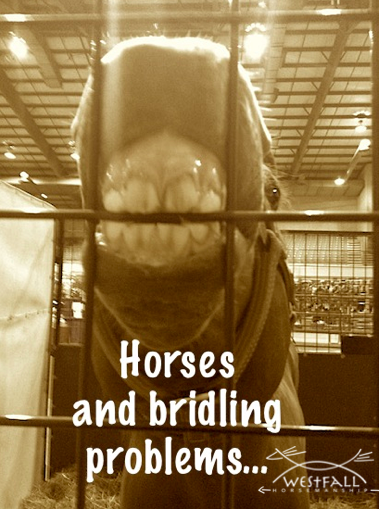 Horses put things in their mouths all the time…but sometimes not when we ask.

Each of these questions has an unique answer such as; drop the head, wiggle your fingers in the horses mouth, or earn the horses respect in other areas. But each one of these problems must also be viewed as part of a ‘whole picture’. For example, several people referred to how ‘easy it looked bridling Jac in Episode 13. If you go back and watch Episode 13, at six minutes in you will see the very first time that I ever stuck my fingers into Jac’s mouth. If you continue watching you will also see the first time that I put the bit in his mouth. And it goes well…but…

Would it have gone as well if I had tried to stick my fingers into Jac’s mouth back in Episode 2, at one minute in? I don’t think so. I predict that he would have hit me in the head with his head as he was trying to move me around AND I would have been at risk of him pushing over the top of me with his shoulder. The pawing would have been a problem also as attempting to bridle him would have put me in his range.Keep in mind when I say this that Jac was not specifically being aggressive but he was ignorant and pushy. Unfortunately if his head hits my head out of ignorance or aggression… it still would have hurt.

Watch just the first two minutes to get an idea;

As you rewatch episode 2, keep in mind that Episode 1 and 2 were both filmed the same day. That means that Jac had already been out and running around for 20 minutes…and yet you can see him tossing his head and pawing the ground after over 20 minutes. Yet in Episode 13, Jac has only been out for six minutes and look at how well he is standing. Why?

Because….MENTALLY Jac is not the same horse he was in the earlier episodes. I can give you physical exercises to do with your horse, but if you don’t view the training process as a whole picture experience then each individual technique will be limited in its effectiveness.

Now watch at least the first ten minutes of Episode 13. If you are crunched for time you can even start by watching from minute 6-10 to get an idea of what I am discussing.

Now for the questions and answers…and I’m going to be asking questions also!

Tip: keep trying to improve your ability to see things from the horses point of view. One thing that works well for me is to try to think of at least three ways to do the same thing. For example; using my fingers in the mouth, using a rope in the mouth, using a bit in the mouth. Are there any other things you have ever taught a horse to put in their mouth? I have also taught several to enjoy having a water hose, with gently running water, put in their mouth. It could be used for flushing their mouths out…but I was just being silly. The more I try to open my thinking the easier it becomes for me to think like a horse. My question for you would be, “What other bridling issues do you see and what are three ways of solving each of these issues?”

Tip: Keep in mind that all horses will be trying to spit the bit out. Give a child gum and they swallow it until they learn otherwise:) The horse will get ‘quiet’ in his mouth faster if you give him another job to do, as I demonstrated in Episode 13 right after bridling. Also, if you think the bit should be a problem…it will be. Horses can read YOUR body and emotions better than most people think. If you are tense and worried about the bit causing issues your horse will tend to react more. To relieve this tension try having the horse carry the bit while you do your normal routine. Try doing your groundwork while he wears it (without reins) and you can even possibly ride him in your ‘bitless’ set up while he carries the bit, unused, in his mouth. This prolonged step of doing nothing but carrying the bit may allow you to relax about it also. Gaiting is often ‘lost’ when collection is ‘lost’…which is also why naturally ‘collected’ horses gait…naturally. If your horse is being lazy, try the collection exercises found here.

Tip: I have trained ALL the horses I have ever ridden to carry a bit. I even trained a horse that had no tongue to be ridden in a bit (he had run head-on into a barn and bitten his own tongue off) without issue. Start by following the Jac series and continue learning! Head tossing during bridling:

Tip: Go back and do all the groundwork you have seen in the Jac series. During this time also spend time using the stick and string to rub up and down the neck, eventually touching the ears. I sometimes use the string part to go around their ears. Most horses will shake their heads at first but will also realize that the string is still there or comes right back. I also attach plastic bags to the stick and rub them all over their body including over their ears. Also watch Episode 14 and how I was rubbing Jac from above while mounted on Popcorn. Make rubbing enjoyable by scratching also. Make it a new part of normal, everyday life.

Tip: I find that most colts don’t have issues with their ears unless they have been taught to by people. I do find that people often expect ears to be a problem and then they become a problem. One example of this would be when I visited Jesse (my husband) at a ranch where he was working in Oklahoma. None of the horses, about 20 of them, had ever had their ears clipped. They were handled just enough to get the tack on for riding, no special time spent on groundwork but no issues caused either. I clipped every single one of them in the same day by myself. I rubbed them all over, introduced clippers and shut them off when the horse stood still (before they even moved) and repeated. I might have shut the clippers off 20 or more times on each horse to ‘remove pressure’ and reward…and I was able to clip all ears. I didn’t expect a problem and no one had created one before me…so there was no problem.

Tip: Ah! Perfect example of both questions above. This horse has come to the conclusion, somehow, that the bridle is a part of the ear problem. You need some creative thinking; what is different? Some possible answers are; the bridle is tight and the amount of pressure applied during bridling is different than during haltering or normal handling, the bit or some other part of the bridle is poking him at the same time that you are trying to go over the ear (touch his ear and poke him in the eye enough times and he will stop letting you touch his ear, lol) or…someone backed off and allowed him to say ‘no’ but only during bridling. There are more possibilities. Repeat the exercises in Episode 13. If he is fine with the pretend ‘rope bridle’ then, for fun, put the actual bridle on and then pretend to ‘bridle’ with the rope after the horse is already wearing the bit…does he respond differently to the ‘rope bridle’ going over his ears when an actual bit is in his mouth? Keep exploring from different angles. Horse ignoring rider during bridling:

Tip: Get dummer horses. LOL. Just kidding! Your horses have gotten smart to who can hold them accountable and who cannot. Now the kids have to become smarter than the horses. Generally at this point, if the horses are truly good for you 100% of the time, then the kids need to learn how to make the same thing happen. Have you pretended to be the same height as the kids? Have you taught the horses to be bridled by you…while you sit in a chair? Try leaving a rope halter on under the bridle for awhile if they kids need a predictable way to be able to drop the horses heads down. Outsmart the horses!

Tip: this is similar to the horses above…only the lazy version! Now you get to become more creative. You have tried pressing on his tongue…now maybe you need to try scratching it, or rolling it, or pretending it is a new toy. Can you stick your fingers in from both sides and touch them in the middle where the bit would go? How many fingers can you fit (no getting bit here) three? Four? Three from each side? Remember the point…which is to remove your fingers when he opens his mouth. If you get three or more fingers in each side and he is still asleep…you could pretend you were playing the piano…pick your favorite song! I hope you found these tips and the over all theories helpful. Remember that they all need to fit into the overall plan. A horse that is sleeping while being bridled often has this ‘issue’ in other areas. Make a change there and see if it helps to carry over. A horse that is reactive about his ears is usually reactive in other places…whole horse, whole program.