Emmie realizes another dream…showing at the Kentucky Horse Park. 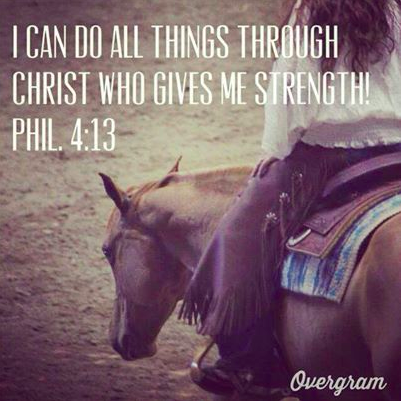 Today Emmie will realize a dream she had as a child; to show at the Kentucky Horse Park.

You may remember Emmie from my April 13th blog and Louie has written several blogs here.

I think her story is important because like most dreamers, Emmie could never have predicted the path that lead her to reach this dream.

Emmie may not have been able to predict her path but she still did her part. Many people are confused about how you can work toward something without knowing exactly how to get there. Thomas Edison said it this way, “Opportunity is missed by most people because it is dressed in overalls and looks like work.”

Emmie has a Facebook page, The Redheaded Cowgirl, where she will keep you updated and where she supports her ‘horse show habit’ by selling bracelets and more. 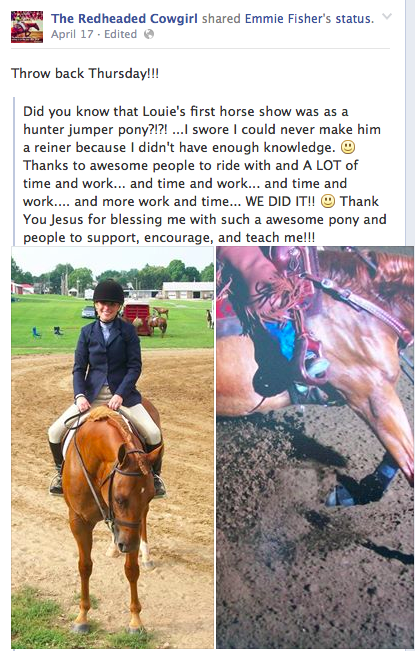 Emmie and Louie when they were still dreamers.

If you can attend remember to cheer especially loud for these two as there is a “People Choice Award” being presented tonight!

Here is the video of Emmie and Louie realizing a dream just weeks ago at Equine Affaire’s Fantasia:

For more information on the event itself you can visit the Kentucky Reining Cup website or the Rolex Kentucky Three Day Event page, which is where the following information about the event is from:

What:
The equestrian sport of Eventing consists of three distinct elements: dressage, cross-country, and show jumping. Originally, Eventing competitions were held around the world to test the fitness and training level of cavalry mounts. The winner is determined by the horse-and-rider combination with the fewest combined penalties from the three phases.

The Fédération Equestre Internationale (International Equestrian Federation – FEI), the world’s Governing body of equestrian sports, has designated the Rolex Kentucky Three–Day Event as a Four Star Eventing competition. Stars are used by the FEI to denote the level of Eventing competitions. Four stars is the highest designation and this designation is given only to the Olympic Games, World Championships, and six annual events around the world.

Riders compete for a chance to win the $250,000 in prize money and a shot at the $350,000 Rolex Grand Slam of Eventing, which is awarded to any rider who wins the Rolex Kentucky, Mistubishi Motors Badminton and Land Rover Burghley Four Star Events in succession.

Reining competition shows the athletic ability of the western type horse in an arena, where competitors are required to run one of several patterns. Each pattern consists of small slow circles, large fast circles, flying lead changes, rollbacks, 360 degree spins in place, back-ups and the exciting sliding stops.

The Kentucky Reining Cup features The Adequan/USEF Open Reining National Championship which will serve as the Selection Trial for the 2014 Alltech FEI World Equestrian Games U.S. Reining Team. The Championship will be an FEI-recognized CRI3* event held in two rounds over three days, April 25-27, and will offer $100,000 in prize money.

The Kentucky Reining Cup will also include the World Freestyle Championship which will award the title of “World Champion” in Freestyle Reining, as well as $20,000 prize money that will mark the largest purse for a Reining Freestyle anywhere in the world.