What do you love and hate about attending a horse clinic?

I love teaching horses and teaching people. So giving clinics seems like a win-win…and for the most part it is. 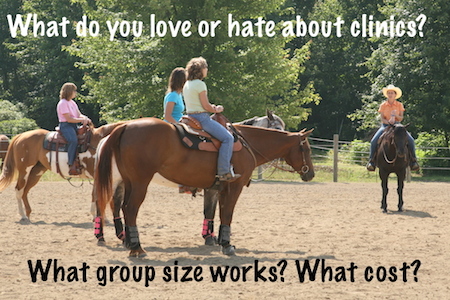 The difficult thing for me is typically the group size. I like small groups. I want to know your name and your horses name and I like to take my time.

There are two issues with this;

So maybe there is such a thing as too small a group. Especially when I get feedback that people like watching other people get instruction and ask questions.

I asked and I explained…now it is your turn!

Please leave your comments and ideas about what is ideal in a clinic setting; things you have loved or hated (leave out names please) and while you are at it…go ahead and throw in prices.

How big of a group?

Is the group divided during the day?

Do you like specific topics during the day or leave it open to what comes up?

Is watching almost as beneficial as riding? 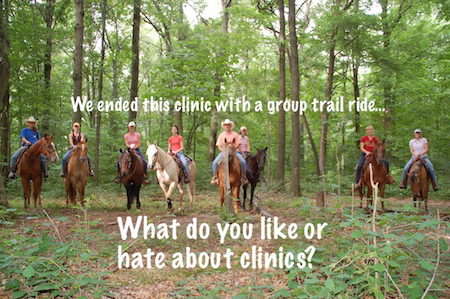