Do you believe that a horses reaction to everything are a result of training, his innate personality, or both?

Hi Stacy! Jac is doing amazingly well. Seriously, my jaw drops when I watch him perform. I have to ask, do you believe that his reactions to everything are a result of your training, his innate personality, or both? I can only think back to some of my horses, and going down that empty aisle of curtains would have been daunting. As would walking into a new, empty arena. I had some seasoned, 12-year old horses that would be fine in competition, wonderful in the warm-up arena, but going into the big ring alone to just warm up was one spook after another. They also would have panicked being entirely alone in a stall like Jac’s – especially after hauling for so long next to their friends in the trailer. I mean, heck, some would get upset if they were tied to the opposite side of the trailer, or couldn’t see their buddy in the adjacent stall. Sometimes I am convinced it could only be training, but then again, I started a colt a couple years ago whose third time being ridden was at a horse show and he was calmer and paid better attention to me than my mare of 3 years!.
Do you have ways of building up confidence in horses that are less sure of themselves? Or do you believe that for the flightier horses, the best thing you can do is simply exposure?

I think both the training and the innate personality play a part. Jac is naturally very confident but the tricky part with him is getting him to view me as the leader. He has a tendency to think he is the leader.

Roxy was very timid. She would ‘attach’ to a strange horse in the length of one trailer ride. She stressed out so much at her first few shows that she lost her tail hair! 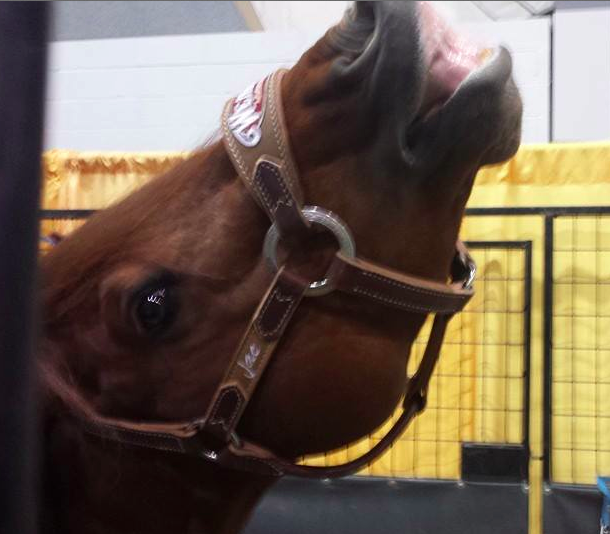 Both horses will benefit from exposure. If you look back at Jac in Episode 28 when I ponied him into the same arena he tried to climb on top of Newt when the clapping started. I chose not to ride him at that time because I knew he didn’t view me as a leader strong enough to trust me under that pressure. As I have worked to train him to a higher level he is also viewing me more as a leader.

Even if you look back to Episode 14 you will see Jac questioning my leadership. When he thought the ‘ball’ was the answer he almost ran me over to get there…which was disrespecting me directly. I had to be more firm with Jac’s personality type pushing through my space than I would have been with Roxy even though they both would have required correction.

I hope this helps shed some light on the subject. It really could be an entire book to answer the question! I suggest you keep looking for this ‘thread of thought’ through the blogs and videos. Once you find it you will have the key to understanding how to be a true leader for your horses.