Day 2: How did we pick the foals? What are their names?

I asked for your questions and many of you responded. It looks like the number one question was ‘What made you choose these two babies?” It’s a bit of a story…but I will try to make it shortish.

From the first time I saw Last Chance Corral adopting went on my bucket list. Something I was determined to do at some point but I also believe that the timing has to be right.

Last year when Jesse and I traveled to Germany we visited some amazing farms and I was reminded that I have always wanted to study dressage. I kept saying that I should get a ‘souvenir horse’ from Germany…a big warm blood would be fun! But I was just kidding…except…

When we came back I did start taking some dressage lessons. I have loved it and although it will be another horsey hobby of mine I did consider getting a horse that might be a bit more suited for it. Ok, I was looking for an excuse to get another horse…I can use my reiners as both Newt and Popcorn proved by achieving better than 70% at our first schooling show…but did I mention I wanted another horse?

In my spare time I would search the web. Not too serious but rather regularly. Nothing really interested me. I’ve been doing this for almost a year. Then…

I visited Last Chance Corral’s website because I usually do posts in the spring. I had heard that they were full to capacity…and thats when I saw #117-“Press on Regardless” and I knew I had found my horse! It even sounds crazy now when I say it but this was the one I wanted to invest in.  And as they say…the rest is history!

The second foal wasn’t as easy. Jesse and I went to Athens with a few ideas but nothing solid. For this foal we were going to wait and meet whoever was there. The trouble was that there were so many to choose from! We looked at everyone and it didn’t get easier…except we individually kept coming back to the drafty little black. I say ‘little’ because he is younger then Presto…but really he is already bigger!

Jesse spent last year coaching riders at Asbury University and many of their horses were draft crosses, especially the police horses. These gentle giants had apparently worked their way into our hearts because when I finally asked Jesse to make the final choice, he chose #149- “No Regrets”. Although he is 6 days younger he is substantially bigger.

Here are some of their stats: 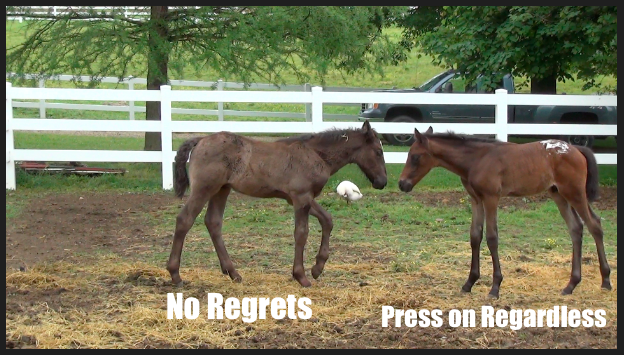 Initially I thought I would like to adopt just one. It isn’t that I wouldn’t love a barn full but the reality is that I also know my limits. I have a limit to the amount of time that I have, the number of stalls I have and the amount of money I have. I even sold one of my horses to keep myself inside of my self-imposed-limits.

But I also knew that depending on the age I might have to take two. Emotionally I want ten…realistically I know I have limits. Having said all of this…I am incredibly happy that I currently have two. Presto was sick at the same time I was. He was too sick to leave and he didn’t respond to the antibiotics as well as hoped…same as me. He is finally getting better but ins’t quite right. I just rode for the last two days after missing nearly two months from being sick…you could say we are really on the same track.

No Regrets path isn’t quite as clear. I know he and Presto will be keeping each other company for the next few months. A piece of me thinks that he will be for sale in the future and another part of me is planning for what I will do if we keep him. I love the chance to work with yet another breed and see what he can become and I believe he will find his true home someday…maybe here, maybe not. I’m not stressed about the decision and I have no regrets (pun intended)!