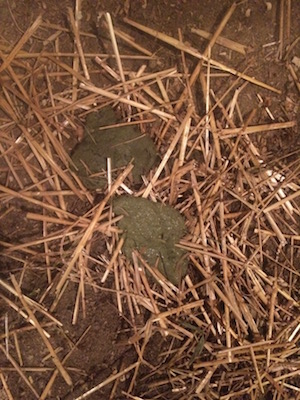 Adopting these two has been remarkably like bringing home a child. Expect them to sleep, wake, pee, poop, eat, sleep…repeat! Throw in some play time and it pretty much sums up the days for now.

Although it is fun, watching the foals right now is also critical. The team at Last Chance was very clear that you often see changes in their behavior, or a lack of perkiness, as the first symptom of a problem (so I have an official reason to be watching them at all times, lol).

During all of that watching it is important to watch for things going in…and things coming out. Watching for urination is a great way to make sure they are hydrated. This also helps me know who might be taking in more or less milk. Just because the bucket is lower doesn’t mean they are both drinking, although these two are making things easy because they both drink when I’m around. Having them trained to drink from the bucket is sooooo nice! My job is to keep the food fresh and available, their job is to drink and eat.  I also watch for who is trying out more solid foods like the milk pellets, hay or hand picked grass.

This lovely photo shows one pile from each foal this morning. This is the correct consistency which Last Chance describes it as ‘the consistency of frosting’…which has turned me away from chocolate cake for the time being:(

The next sign I will watch for is for the foal manure to change to the standard adult horse shape. While we were at Last Chance Victoria was cleaning up manure and announced, “Horse poo!” because one of the foals had made the change to grown up poo shapes, lol. 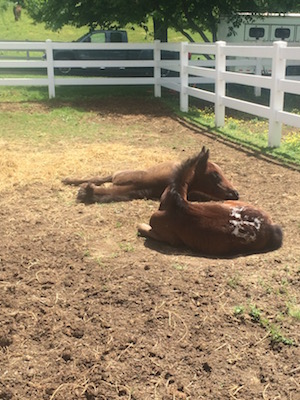 The place where we are living has an awesome set up for housing the foals. The stalls open into runs and I can choose to keep them in over night and then swing the gate open during the day. They have already decided that sacking out in the sun is the place to be! Later in the afternoon they wisely choose to move back into the shady stall. They have officially met the neighboring horses who were fascinated by the foals. The foals were more interested in playing with each other and tasting everything in sight.

Thank you to everyone who left a comment and questions. I will work the answers to those into the upcoming blogs…right now I’m gonna go scratch a foal!