Watching horses interact with other horse. 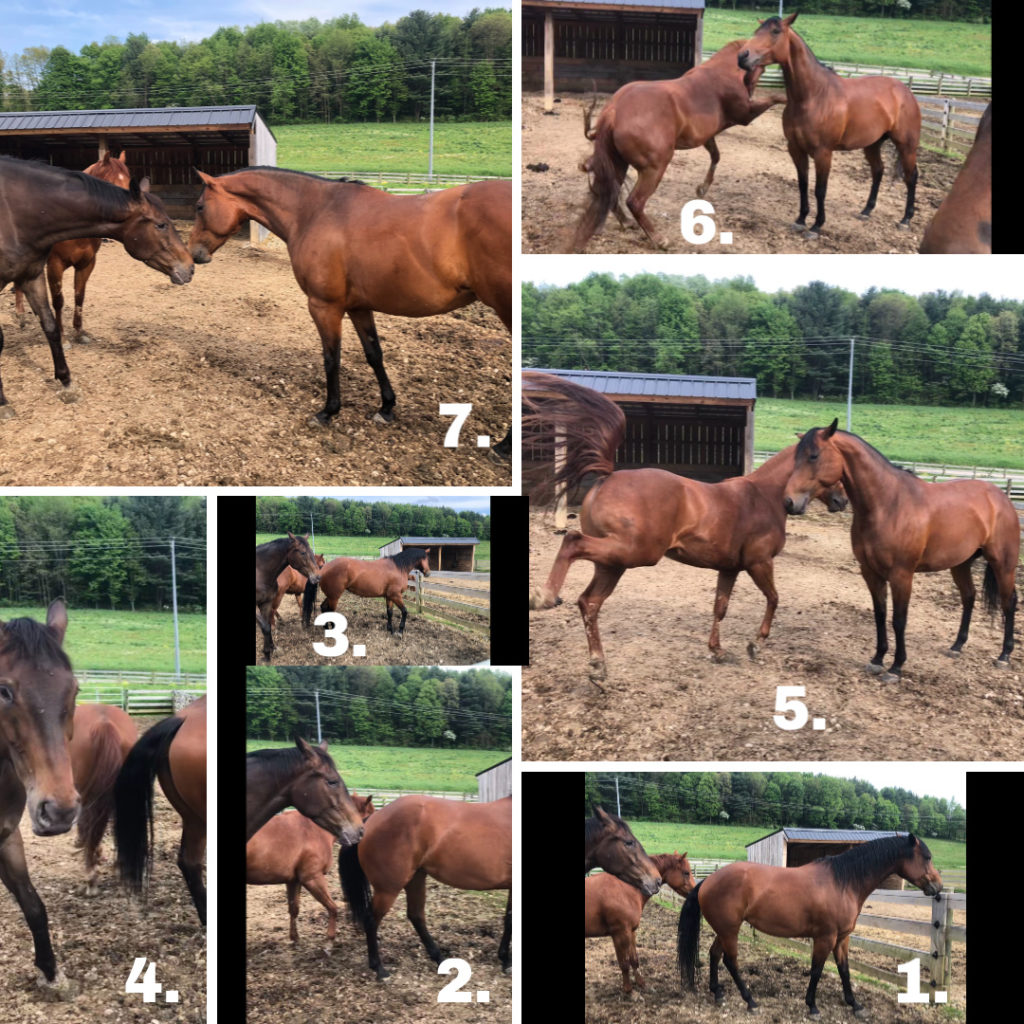 I love watching horses interact with other horses. There is so much you can learn about them as you watch them together.

Several posts ago I shared a video of Presto meeting up with Justice, the other nurse mare foal that he was raised with. In the video, Presto was very aggressive.
If you watch the progression during the video you can see how quickly Presto went from suggesting things to actually kicking with more intent.
Part of the reason that Presto escalated was that Justice also chose to leave. Justice didn’t want to be involved in a fight which gave Presto even more confidence to get more aggressive.

In this series of photos, there are three horses. Presto (dark appy), Gabby (bay mare), and a new sorrel mare that was just introduced.
I think it is interesting to watch how the communication went and Presto’s role in the interaction. All of this happened in less than one minute.

Background: Presto and Gabby are turned out together regularly. Gabby is clearly the leader. When the new mare came in she had questions to ask…and I enjoyed watching Presto even though he was more indirectly involved.

In photo 2 Gabby took a step back. She did not seem rushed but did seem very solidly confident. The new mare begins to turn. Notice Presto hasn’t moved.

In photo 3 Gabby begins to turn toward the new mare, who has not moved far, and her ‘energy’ level is up. You can see that Presto is now stepping away from this energy even though Gabby is turning away from him.

In photo 4 both the new mare and Presto are stepping away. Things appear to have ended.

In photo 5 Gabby has essentially pivoted and is facing the other way. She is standing very firm and confident while the new mare approaches with a lot of energy. The new mare squeals, bucks and kicks out directly behind herself. Notice Gabby’s feet don’t move between this photo and the next.

In photo 6 the new mare strikes out alongside Gabby…who still doesn’t move her feet. Presto can be seen watching from a distance.

In photo 7 Presto can be seen approaching Gabby in a questioning manner. Can you see how he lowers his head and reaches out with his neck without a big ‘presence’?

When watching horses interact it is important to watch all the horses in the pasture. While the two mares were more active, Presto was still giving plenty of signs as to how he was reading the situation and how he fit in the situation.

I’ve received several questions like this one, “My questions are: were there challenges with Presto missing some basic body language cues that he would have learned from his mother? Did Presto have any issues learning personal space and boundaries due to his upbringing by humans?”

Although Presto wasn’t raised by a mare, I did begin turning him out with adult horses at the age of four months. I was careful to turn him out with docile horses at first but as he grew and learned I began introducing more horses. Much of his learning took place in the pasture during interactions like this one.

While I recognized the impact his pasture mates were having on him I still maintained my own standards for how he was allowed to behave.
————————————–
I’ve owned Presto now for four years. He has grown so much and I’m finally ready to start sharing his adventures. You can find all of his posts on my website (stacywestfall_com_)
What questions do you have for me about Presto?
#PressonRegardless #Presto #Equithrive