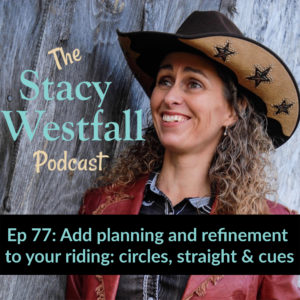 Ep 77: How does planning help set your horse up for success? How do the layers of training build into a more refined cue system? These topics and more come up as I answer the two following questions.

Question 1: I loved the pattern you shared on Episode 70, Riding Circles within Circles. I felt a huge difference in my horses and myself within 10 minutes…Are there any other patterns you can share with us and what you would use them to accomplish? Second, with a high school level horse, do you still ride these patterns? And if so, how much of your ride time is spent on patterns or versus concentrating training vs. trail riding?

Question 2: I’d like to know more about the hug cue. My horse has improved but is smart and is anticipating. He is slowing down too much… I’m wondering if I could use it as also to go forward a bit faster.

SWS077.mp3
[00:00:03] Podcasting from a little cabin on a hill. This is the Stacy Westfall podcast. Stacy’s goal is simple to teach you to understand why horses do what they do, as well as the action steps for creating clear, confident communication with your horses.