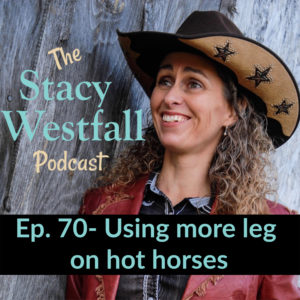 Q: After warming up and we’re beginning to work, I have a really hard time keeping his gait consistent, usually start out slow and easy. But as we continue on, he has a tendency to increase his speed and will tense up and occasionally throw his head. Whenever I ask for a change of gait, especially downward transitions in, it most often happens during the lope. It also happens when I’m lunging him prior to riding, and I would like to know your opinion on how my contributing to his craziness and inconsistent gait and how can I do better at helping him relax and slow down?

A: Stacy explains that there are many things to consider such as: lack of balance between riders hands and legs, riders ‘correction’ causing more problems, riders concept of how ‘light’ a horse ‘should’ be, rider not planning ahead, horse ‘trying too hard’.

SWS070.mp3
[00:00:03] Podcasting from a little cabin on a hill. This is the Stacy Westfall podcast. Stacy’s goal is simple to teach you to understand why horses do what they do, as well as the action steps for creating clear, confident communication with your horses.

Episode 25: Is Your Horse Anticipating?

Episode 38: Rewarding Physical And Mental Changes In Your Horse

Teach your horse to stand still: trail and arena Episode 3: The Trail to the World Show