Ep 69: Training horses for others vs training your own. 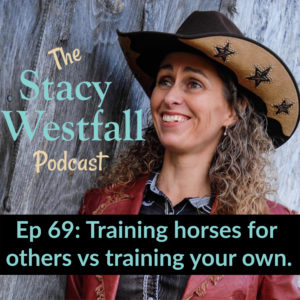 Answer: There are many ways too look at this. Here are a few to consider.
Look for similarities or contrasts between your goals with your horse vs your customer’s horses.
1) Do you plan to show in the same discipline with your horse?
2) Do you plan to keep this horse forever or sell?
3) Do you feel judged by ‘others’ if you work your horse before customers horses?
This podcast goes deeper into this subject.