When riding your horse on the road should you go with the traffic or against it?

“Stacy, When riding your horse on the road should you go with the traffic or against it? I feel better going against it as I do not like the cars coming up behind me right next to me. My girlfriend always rides with the traffic.” Priscilla B. 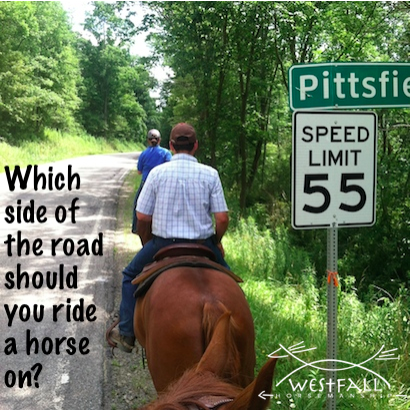 The shoulder of the road and the traffic pattern often determines the answer.

In my opinion there often isn’t one clear answer. There are several things to consider when deciding what side of the road to ride your horse on. The first would be to know if their was any local law or standard that is followed. For example, if I were to ride in an Amish area I would very likely follow their traffic pattern as it has been established. Also keep in mind that some states have set standards. In an interesting article on The Horse titled, Rules of the Road, by Milt Toby, I learned that;

We largely let the shoulder of the road and the traffic pattern determine which side we rode our horses on. Whenever possible we stayed on the side of the road with the largest shoulder or best ‘escape route’ if the horse were to become frightened. This was especially important when we were training new horses to be ridden around traffic. If their was a large grassy ditch on the north side and a guard rail on the south side we alway rode the north side no matter which direction we were going.

Typically, if all things were equal we tended to travel in the same direction as the traffic. With new horses we rode sections of road that allowed us to pull over and watch the traffic as it approached. If the horse was nervous we also preferred to keep the horse busy rather than waiting to see what would happen.

When I was a teen and first started riding my young horse on the roads she was very anxious around the big trucks, particularly the logging trucks that would pass by. The great thing about riding a horse is that you can hear vehicles coming often long before you can see them. If I heard a large truck I would get her busy by trotting circles in nearby fields or gravel turn off roads. This meant that as the rider I was very carful about which roads I would ride on until the mare became comfortable, and predictable, with the traffic. I chose only roads where I would have easy access to these ‘trainable’ situations.

Once the horses were familiar with traffic it was often less intimidating to ride with the flow…unless the road was known for certain things. If there was a curve where people tended to ‘drift’ to the outside then we would consider switching sides. In this day, with all the drivers texting and messing with phones, I would be even more concerned about distracted drivers.

Occasionally we would find ourselves on a stretch of road that was less than ideal. I remember that sometimes my mother would choose to have us ride against the traffic flow for no other reason than to be able to make eye contact with the drivers. As strange as it may seem, sometimes the accountability of looking someone directly in the eyes will make a driver slow down and pay more attention to their driving. It also didn’t hurt that my mom had a ‘look that could kill’ if she felt her horses or children were being threatened:)

On a bad day you will have people honking and blowing the horn, others yelling out the windows, or semis with tarps that are not secure and flapping as they blow past you at 60 mph. Some people WANT to see something happen…make sure your horse is broke so they don’t get that chance.