After writing a blog titled, “Are some horses ‘unfixable’? Are all horse problems created by humans?” I received the following comment:

“Don’t forget locoweed, it’s one of those toxic plants very prevalent in the western US, if a horse ingest a fair amount of it, they will have lifetime effects for example overreacting to normal situations- hence the name locoweed. I suppose may dishonest people would sell these horses who have been exposed to locoweed and not disclose that fact.” -Stephanie S

Being from the east, I have only heard vague references to ‘locoweed’ and most of the time the person was joking. A google search and several pages of reading later it turns out that ‘locoweed’ is no laughing matter.

Locoweed is a plant that grows in the Western United States and horses, sheep and cattle will all eat it, horses even more so than the others. Some horses will avoid it but sadly, others seem to prefer it and will seek it out. Immediate symptoms (after eating) include; 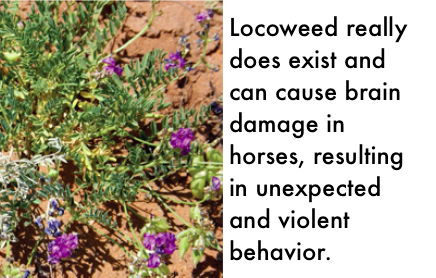 Testing to see if a horse has been exposed is very difficult though because the levels of the toxin quickly disappear from the blood although the horses don’t recover from the neurological damage.

The easiest to read article was on the Western Horseman website. It is written from the first hand experience of a vet. Here is a small excerpt:

“The lack of treatment, combined with the irreversible effects of the disease, render affected horses unsafe for riding. Their unpredictable behavior and inability to cope with the stresses of being under saddle should not be pressed, and many infected horses are either put out to pasture or euthanized, the veterinarian says.

Stubblefield was aware Deuce had low odds of a full recovery, but he still wanted to give his gelding a fighting chance.

“I tried to rehab him for a year and a half, and thought I had him to where he’d be safe enough for me to ride again,” he says. “The first time I tried to ride him [after eating locoweed], he was not safe at all. When we went to put the halter and headstall on, he reared up. He was really frightened easily, and couldn’t deal with any sudden changes. He had nervous signs of ataxia. His brain couldn’t handle the stress.”

Many years ago I worked with a horse that came from a large ranch in the west. Of all the horses I have worked with, he is one of only 2-3 that I found to be truly unpredictable. Several professionals evaluated this horse including veterinarians and we all came to the same conclusion; there was something ‘off’ in his brain. This article makes me wonder if he could have been exposed to locoweed years ago and was still suffering from its ill-effects.