Unbridling problems: my horse flings her head up and causes the bit to bang her teeth

“Hi Stacy,  I was wondering if you could answer a question for me? It would be greatly appreciated.
I have a new horse that has an issue with the bridle being taken off. She takes the bit fine when bridling but anticipates the bridle coming off. When you reach up to remove bridle from ears, she lowers her head and as soon as the bridle clears her ears, she flings her head straight up into the air, pulling the bridle out of my hands and runs backwards with the bit and bridle hanging from her lower teeth. She doesn’t open her mouth to let the bit drop, it’s as if she is anticipating having the bit bang her teeth, however the banging happens when she flings her head up and runs backwards. I’ve tried slowing things way down and putting the bit back in her mouth (which she stands quietly for) and then removing bridle again just to have the same thing happen. I can see the fear in her eyes as she anticipates the bridle coming off so am not so anxious to try again if she is that fearful. I have never hit her teeth with the bit but not sure how things were with previous owner.
So I my question is, should I try using a rope that’s attached to a headstall or halter so she can experience the halter coming over her ears and the rope coming out of her mouth, then if she runs backwards the rope of course would not cause her any pain? Perhaps use a rubber bit or Happy Mouth Bit? Any thoughts you have would be greatly appreciated, this is scary for her and myself not to mention dangerous.
She has no issue with her ears being handled and even clipped but when the bit is in and that bridle comes over the ears that seems to be the trigger.
I’m using a Korsteel Eggbutt copper & steel roller mouth bit. I’ve even though of using a bosal or other non bitted bridle but not sure where to begin that journey.
Thank you for any advice you have to offer.
You are an inspiration to all of us and so generous with your extensive knowledge!” -Carrie 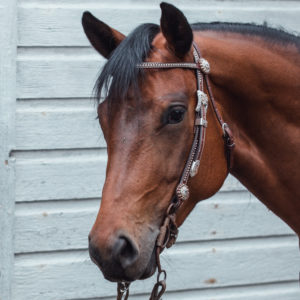 Carrie,
You described perfectly a scenario that I have seen before. I have seen it most often in the early bridle training but it can happen at anytime.
Let’s start with the idea that a horse will ‘carry’ a bit.
To ‘carry the bit’ simply means they are holding up it in their mouth as opposed to the headstall really holding it on.
Many horses will ‘carry’ the bit the first time they are bridled. Others will mouth it and gradually learn to carry it with time.
Whenever the horse begins ‘carrying’ the bit…how they are unbridled is important.
Although this problem can be caused later in a horses life due to a accident, an inexperienced handler rushing the bit out (pulling on it) etc. the early training requires special attention.
There is a short window in the beginning of the bridle training where when the headstall is slipped off the ears…the horse has NO IDEA that the bit is coming out next.
Riders who have always had experienced mounts often don’t realize that a horse wouldn’t recognize this. Sometimes the rider will feel the loose headstall and pull down on the reins…which greatly increases the odds of the bit hitting the horses teeth.
Ideally we want the horse to ‘drop’ or spit out the bit, using the tongue to guide it past the teeth.
The opportunity for prevention is right at our finger tips.
Literally.
All the human has to do is slip the headstall off one ear (or both but hold slight support with the headstall to keep the bit up) and ask the horse to open its mouth.
I use the same cue I did to teach them to open to take the bit in. I simply slip a finger in the corner of their mouth…wiggle slightly if needed. Removing your finger ‘releases’ the cue and rewards the horse. It is generally a quick cue to train.
If a horse doesn’t drop (spit out) the bit on their own I will support the headstall and cue the horse to spit with my finger.
Generally after 5-10 bridling sessions the horse quickly connects the headstall coming off the ears with dropping the bit out of their mouth.
It sounds like your horse doesn’t understand this process.
Although prevention is ideal…this can be retrained.
Sometimes when I have an issue like this I wish I could explain the to the horse that this is a ‘self fulfilling prophecy’. “Ok, look, you’re afraid of the bit hitting your teeth…but when you throw your head up…you cause the bit to hit your teeth. See the logic flaw?”
Unfortunately it doesn’t work this way.
Your horse needs to understand the system…and at the same time you additionally need to retrain the ‘head up, go backward’ response.
I like to start from the beginning and look for any tiny issues. Verify the following things:
1) with a halter on, can you can slip your finger into the corner of mouth and the horse will begin a chewing or spitting motion?
-watch that they head isn’t raised or tossed around
2) Use a rope to simulate putting the bit in and out
-don’t be surprised if this has no effect. Horses are smart and yours might recognize the difference
3) use a rope halter under your bridle. Bridle your horse. Now slip the fake rope in and out of the horse mouth (open mouth with your finger cue in and out). If the horse does raise her head…use the rope halter to drop the head.
4) with the rope halter on under your bridle, begin to slip one ear out of the headstall. Use the halter to cue your horse to keep her head down. The halter should do the job of lowering the head and preventing the running backward.
Note: often this problem gets bigger because when the headstall is removed the place with all the ‘release’ is up and back. By using the rope halter we can communicate ‘stay here’. I would use the rope halter under the bridle until the problem is gone. Then you could transition to the rein over the area just behind the poll.
If you suspect that the horse will not yield to the halter pressure, do additional halter work. If you are still concerned I would consider wrapping the bit to soften it during the training process.
Generally the addition of the rope halter and finger cue are a huge help in communicating with the horse. Keep in mind that she may get better with you but still be suspicious of someone else unbridling. If she is worried about someone else being quick, etc, she may again run back and cause the very thing she is scared of.
I hope this helps!
Ride with Faith…and training,
Stacy Westfall
PS- after posting this on Facebook many people mentioned having an equine dentist look at the horse. I totally agree with horses having regular dental work. It helps in so many areas that might not even seem related. Good catch everyone!