The problem with just choosing a BIGGER bit. 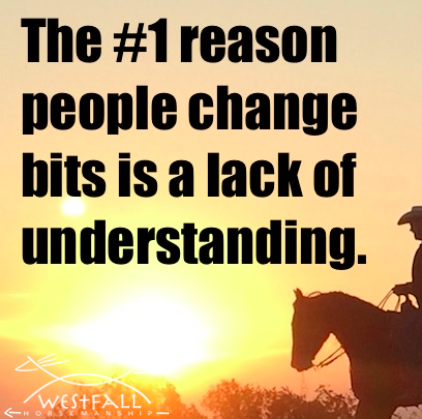 When I ride a horse it feels to me like I am having a conversation with the horse. As I shift my hands, legs or weight I am either asking or rewarding the movement of the horse. The horse is allowed, even encouraged, to give me feedback as we go. The beauty of this is that I am allowed to learn directly from the horse.

Today’s conversation with a horse was interesting. I was riding an eight year old horse that has about six months of training under saddle. After warming up we began to practice trot to canter transitions. For this particular horse collecting himself at the canter is not easy. Maybe it is because he was started under saddle later or maybe it is the way he is built but I can feel two things when I canter, 1) he has to work to collect 2) he would rather go faster than collect (because collecting is harder work).

Many people would automatically put this horse in a bigger bit.

Because by putting him in a bigger bit they would think they could control his desire to go faster AND gain greater collection. AND on the surface it might even appear that it ‘worked’. If he were trained enough he would probably try to yield to the pressure…but…

….what was the real problem?

Here is the PROBLEM

The real problem is that the horse has a lack of strength and coordination at the moment to DO what is being asked of him. The canter is difficult and he is giving us feedback that this is true. Putting him in a larger bit doesn’t develop his strength and ability to carry himself correctly.

The #1 reason people change bits is a lack of understanding.

In this horses case it is important to understand the difference between him saying ‘this is hard’ or ‘I’m getting tired’ vs ‘I don’t want to’ or ‘I’m ignoring you.’ Many people would accuse him of the latter. How can I tell the difference?

Understanding the horse means learning from him. Months ago this horse found cantering on the lunge line difficult and it took time to build the coordination and strength without a rider. Some horses find this easier than others…pay attention to what they are telling you.

This horse also does the transitions better at the beginning of the ride. Each week I can see progress but inside of each day he will get worse as he gets tired. It is my job to challenge him to make him stronger but not to the point of failure. He tries…he just doesn’t have the strength yet. How long will it take? Each horse is an individual…listen to them.

At this point in my life I ride my horses both with and without bits…because  understanding the conversation is more important than the tools.