Can losing your voice make you a better Horse Whisperer? 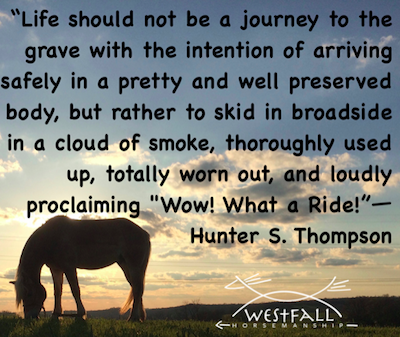 Feeling worn out? Remember this quote.

This quote keeps running through my mind as I have completely lost my voice. In one small way I have totally and thoroughly used up my body.

It began three weekends ago when I spoke at the Midwest Horse Fair in Wisconsin, followed by speaking two weekends ago at the Equine Career Conference in Pennsylvania, and I completely used up what I had left at the Cowgirl Spring Round Up in Montana this last weekend. And I don’t regret a moment of it.

Sure, I do wish that I had been able to speak loud enough to be heard (I can manage a low whisper) but I was able to enjoy the flip side of not being able to speak; the ability to listen.

It was very appropriate that I taught about reading your horses body language at all of my events. The lessons I taught have been interesting to observe from my new ‘speechless’ vantage point. Let me explain.

I taught about watching the horses body language because they speak more in body cues then they do in spoken word, which tends to be our human default. They also are experts in reading body language…as it is their primary language.

As soon as I lost my voice I noticed a shift in the people around me. First, some of them were more uncomfortable. I was unable to joke and talk in the way that was most comfortable for them and we could all feel the shift.

Second, I noticed if I whispered…they whispered. This has been ongoing and pretty funny. Those who commit to communicating with me have to focus on my body language, lip reading and sign language which means they have to meet me half way. This is the same thing we need to do when we are working with our horses. We need to focus, read the body language and realize they are trying to communicate with us even if they are not speaking.

Third, I have noticed that in some ways my communication has become more simplified and therefore more clear. I don’t bother with the small talk…because I can’t speak. But I am also more clear about the point I need to make. The rules seem to change when you change languages. For example last night I was ‘speaking’ with my three teenagers…which is basically like playing charades. I would start by miming something like eating. Then using sign language I would start to spell D-I-N-N…then one of them announced, “Dinner!”

Then I started to spell S-O…..but the story gets better. I forgot the sign language sign for the letter ‘U’. I left them hanging with, ‘so’ and then started signing the alphabet in order, a-b-c-d-e-f-g, as a refresher. Without speaking the boys picked up on the pattern of a-b-c and when I would get to a letter I didn’t know they would show me (they took a sign language class a few years ago). All of this took place without being rushed or frustrated…we were even laughing! 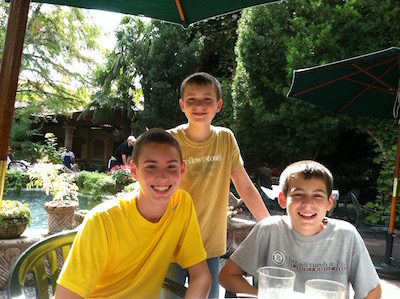 This communication breaks all the rules of spoken language. If I had my voice do you think I could just announce the word “Dinner” and receive as much engagement, help and encouragement?

Can you imagine if we were all this forgiving and thorough with our horses? Listening intently to what they are trying to communicate, going back to the basics when our language gets broken, remaining calm and even laughing at the mistakes?

Eventually my voice should return but I do hope to hold on to these lessons I have learned. I have even considered having one night a week where the whole family speaks only in signs. Maybe offer rewards for those who remain ‘speechless’ instead of punishments for those who don’t? I have to think about it though. Last night, I pointed at one of them and then pointed toward the kitchen, he looked at me funny. Another teen said, “she wants you to do your dishes” to which the first replied, “oh…I didn’t hear her” and laughed. Tricky teens.

While I have to admit I have not generally been a fan of the phrase ‘Horse Whisperer’ I may have to rethink my stance. Maybe I should schedule some ‘whispering clinics’ where the participants expect to learn about whispering to their horses…but are also required to whisper themselves the entire weekend!