Life has many twists and turns and I am constantly intrigued by the directions it takes. When I started my journey with Jac it was a personal milestone for me. It was accepting what had happened with Roxy and seeing that I had something to offer Jac. 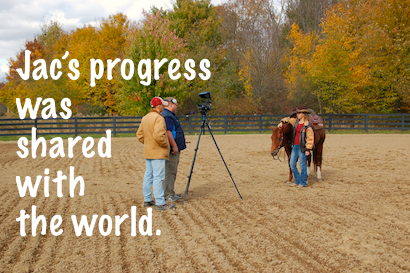 I tried to imagine what it would be like to video Jac’s progress and share it with the world. I knew it would be an interesting journey…because every horse I have trained has been an interesting journey. There are always questions that come up during the process, some have clear answers; correct Jac when he bites, others are not as easy; do I show him now or wait another month?

What I love about training horses is that there are always breakthroughs. Many of these moments happen in the barn and are never seen by anyone but the horse and rider. Following Jac allowed many of these moments to be caught on film. Most of these breakthroughs are small, incremental steps. These steps lead the horses forward, sometime that is a path to greatness in the show pen and other times it is to a life of bringing joy to someone in their backyard. The point isn’t to make horses that are great in the show pen…it is to make horses that are great individuals no matter where they are.

And as predicted, horses have setbacks, that was illustrated by Jac along the way. Simple things like when I went out of town and Jac didn’t get trained to bigger things like dental trips, vets and chiropractic adjustments. Many of you identified with the sometimes difficult decisions that surround owning horses.

I am very satisfied with everything that I accomplished with Jac. I believe that the foundation he has will be with him for a lifetime. I am also glad that I chose to be a part of Jac’s journey. You may remember that I struggled at first with the idea that he would look like Roxy and the relief that I found in the simple fact that he was a different color. The more I got to know Jac the more I was able to see him as a unique individual, which was a good thing. It was a good thing for me because it helped to move me away from directly comparing him to Roxy. It was a good thing for Jac because he has his own uniqueness and shouldn’t have to spend his life trying to be someone else. 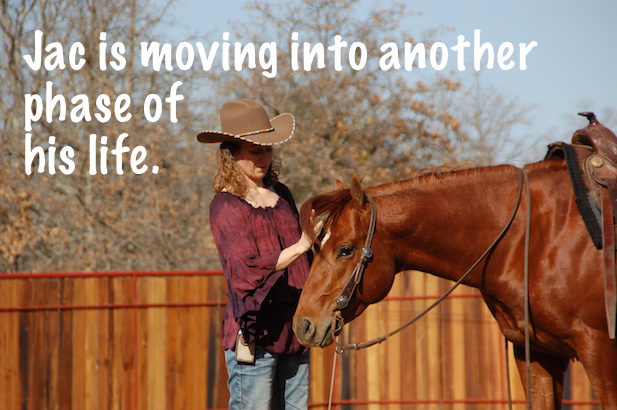 As of Monday, Jac was sold.

When the video project started we committed to bringing you the ups, the downs “and everything in between” during Jac’s journey and this week Jac has moved into another phase of his life.

It was fitting that I received this question after last weeks episode of Jac;

“Laughing, really, at my self for thinking this but: What does Greg do? Haha. I mean what does he do to earn enough money to invest in horses, their care and training with you? You are all truly blessed.” -Natalie

Greg really is a regular guy who decided to try reining. He works in a small family business in the office where he manages the accounting. He cleans stalls, saves his money and goes to horse shows when he can. Like many other people across the country he keeps horses in training with professionals because horses are the hobby he has chosen instead of golf or fishing or any other sport. Greg just happened to call the Westfall’s who just happened to know of a horse for sale…who just happened to turn out to be Roxy. Life takes interesting turns. Coincidence or Godincidence? I know what I believe.

Greg bred Roxy because she was an amazing horse and he looked for professional guidance to ensure that his decision would also help to improve the breed. I believe that he accomplished that goal with the four foals that she had before she died.

Like most horse owners Greg also knew that he probably wouldn’t keep them all. He struggled with the decision to sell Roxy’s first foal, Roxter, but eventually chose to keep the filly and sell the stallion. The money from Roxter’s sale helped to fund the breeding and eventual training of Jac. Watching Roxter succeed was a blessing because, although a small part of Greg knew he once owned that horse, another part of Greg knew that Roxter may never have reached that same potential while he owned him.

Roxter also played a part in the decision to collect Jac’s semen. Jac has played a different role than Roxter because Roxter was the first of Roxy’s foals, but Jac was the last. Rationally this shouldn’t change things much, but emotionally it changed things a lot. As Jac’s owner Greg has wrestled with the idea of selling Jac. He sold Roxter because he knew he didn’t have the facility to keep a stallion long term but he was still tempted to keep Jac. Greg is a friend as well as a client and throughout this journey we have been trying to help him with the decision. If you listen during episode (12) you can hear me say that Greg is there watching. He also drove down numerous times to watch Jac while we lived in Ohio and flew down to Texas when we were there. It was easy to see that Jac was a nice horse, it was easy to see that he could be successful…but one thing kept nagging Greg. He had made the decision to sell Roxter because he was a stud, why was Jac different? Long term what was best for Jac? 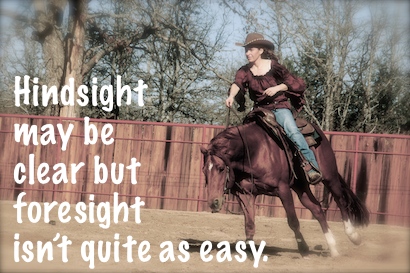 Don’t we all wish we knew what was best long term? Hindsight may be clear but foresight isn’t quite as easy. Jesse and I had decided to sell our house in 2012 and when it sold in 2013 things got more complicated. We want to live nomadically, roaming around the country with our kids and horses for a year or two…but that decision effects other things. Did Jac’s plan fit with ours?

Jac is clearly bred well and he is talented. The reality of being a successful stallion is earning the right to breed, proving that the horse carries the potential to improve the equine world. Am I the right person to give Jac that opportunity? I have confidence in my ability to train a horse but I am also realistic about having the facility and the time.. I have chosen over the last few years to spend less time showing and more time traveling and teaching.

As you all know, I dropped Jac off at Select Breeders to be collected at the end of June. At that time they told us that they would likely need him for a 4-6 weeks. Our son needed to show his horse the second weekend in August in Ohio to finish his green reiner belt buckle points and I told Greg we would plan on picking Jac up after that show. It ended up that Jac completed his ‘job’ at Select Breeders before our son showed and Greg needed to decide what to do with Jac. Greg was still considering selling and we suggested that if he was serious we could suggest a trainer nearby Select Breeders that could evaluate Jac. We knew we liked Jac but there was always the chance that we were biased.

Greg chose to have Jac evaluated and we suggested a trainer that we thought might fit Jac’s style. It turns out that we were not biased, other people agreed Jac was a very nice horse and someone made an offer to buy Jac. Greg accepted the offer and as of Monday, Jac was sold.

It is interesting how life works. The money that Greg received from selling Roxter was used to create and train Jac. Jac was a blessing to Greg, myself and the many viewers of the Jac series and he still has more potential. Will he be a great show horse? A great sire? Only time will tell. 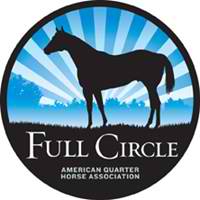 I do know that Greg will use the money to continue the bloodlines. He has kept two fillies out of Roxy and I am looking forward to riding not only Roxy’s sons and daughters, but her granddaughters and more. Greg also signed Jac up for the AQHA Full Circle Program which helps ensure that Greg will always be notified should Jac ever become unwanted or ready for retirement.

Even though I will no longer be training Jac, I still hope to do some follow up blogs and videos. I will aim to attend some of the shows that Jac goes to and I will continue to be his fan. Jesse and I will also be keeping our eyes open for the perfect mare to use some of Jac’s frozen semen with. Riding one of Jac’s foals would be the fourth generation of the bloodline that I have ridden…I would enjoy that.

It is tempting to look at Jac’s sale as an ending but I am choosing to look at it as a new beginning. I expect that Jac will receive exceptional care and planning very similar to what Roxter has. I am also looking forward to the next chapter in my life. I am a trainer at heart and I am seriously considering the suggestion of training a rescue horse as my next project.

I still love the following paragraphs that have been at the end of each Stacy’s Video Diary: Jac, Youtube video. I was tempted to change the first line to “This was the story…” but I am unable to because I believe the story will go on. This is just another twist in the road, and I am excited to see what is around the next bend.

Join us as we follow Jac through weekly videos documenting his training journey from his first session to his first show and more. It is a journey filled with questions, breakthroughs, setbacks and accomplishments… and everything in between.

Below is the video that most of you thought was the end of the season:

Below is the video of our interview with Greg: