Is my horse deaf or does he have 'selective hearing'? Have you ever encountered a deaf horse?

“Stacy, I also have a 11 year-old deaf child, however he is of the ‘four-legged’ kind. I have had my 11 yr old APHA gelding for 3 years now and I’m still discovering to what extent he is ‘deaf’. I write that with emphasis because he too is subject to the rumor that he is deaf. The previous owners were NOT horse people but WERE animal lovers and took him in from a family member that had to move across state and could not keep him. The ‘not-so-horsey’ owners were trying to place him and warn me that he was deaf. I took him in for his forever home. Many people I have met since that new him and his original owners, have told me they ‘heard’ he was ‘deaf’ also. I have been riding for almost 10 years and encountered many horses with ‘selective hearing’. In the last 3 years I have learned that he is of the ‘selective hearing’. With questionable consistencies in the history of his training he is more responsive to visual and physical cues than vocal commands, but he does ‘hear’ some things. I learn ASL in an after school club at my high school and have considered brushing off my signing skills to help further his training. Tell me, have you ever encountered a deaf horse? or know of any one that has had experience in training one?-Kristen”

I have seen both horses with ‘selective hearing’ and those that are deaf. Most horses who choose to ignore some cues, like ‘Whoa’, will often give themselves away with listening to other cues, like a verbal cluck or kiss to ‘Go’. Popcorn, the horse I trained during the 2006 Road to the Horse Colt starting competition was very much like this. Months into his training he seemed deaf to the word Whoa. He would stop off the bridle reins and leg/seat cues but he completely ignored ‘Whoa’. I often joked that he could pretend very well that he was deaf….except that when I ‘kissed’ to ask for a lope, he took off like a race horse!

It was also obvious that he heard other noises;shake the grain bucket, crack a whip, etc and he could hear it even if the noise was coming from around a corner where he couldn’t see the noise maker. Deaf horses don’t do that. 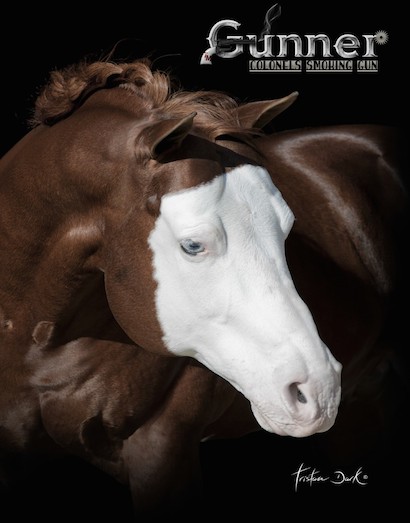 Consider the following excerpt from The Quarter Horse News:

“Although it’s rare among horses as a whole, deafness has become more frequent in the reining arena as Gunner’s descendants and relations show off their talent. Trainers who have ridden them say their schooling just requires a bit of creativity. A horse that can’t hear “whoa” needs to learn different cues than a hearing horse.

But the desire for a talented reining horse seems to outweigh the challenges of dealing with deafness. Gunner stands to a full book every year at a $7,500 fee, and mare owners are well aware of the chances of getting a deaf foal.” for full article click here

I have never trained a deaf horse but I have spoken with many trainers that have. As the article above made note of there has been a definite increase in the number of deaf horses in the reining events. Most of the trainers also agree that there are just some adjustments that need to be made when you are riding or training these horses.

Personally, I have been joking for several years about finding a deaf Gunner bred horse that wasn’t quite making it as a reiner…I would like to try one out as a mounted shooting horse!