I did end up taking Jac to the vet just to be on the safe side. I had given him time off and Jac was pretty much better so the vet couldn’t find anything. The vet told me to give him a couple more weeks off and then start slow. He thought that it had likely been some kind of soft tissue; maybe he landed funny. Whatever it was it was minor enough that the exam didn’t reveal anything. I am still glad I gave him time off, he is only two, better safe than sorry.

Two new ideas that I have introduced to Jac before this video are spurs and the back up. When Jac felt lazy before this I would use the end of my rein or a dressage whip to reinforce my requests. Even though I am now wearing spurs I will still use the end of the reins or dressage whip if he is resistant to going forward. The spurs are just an added step after the request. 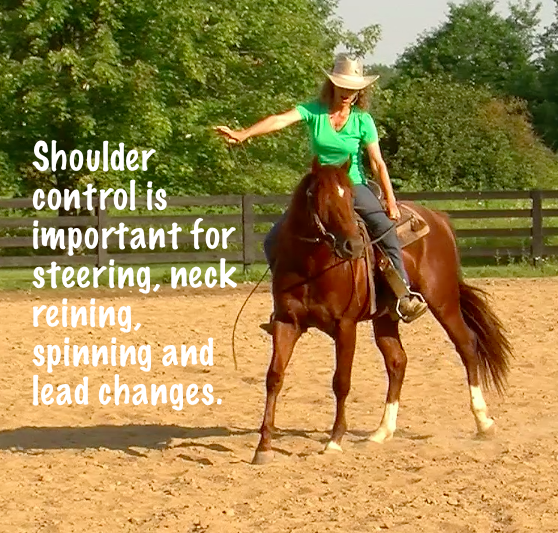 The new concept I am introducing in this video to Jac is ‘spiral out’ or moving the shoulder. Controlling a horses shoulder is important for advancing steering and eventually for neck reining, spinning and lead changes.

At 7:40 I show an example of what I consider ‘natural horsemanship’ which is using something that the horse is already doing to set up for something I want to accomplish. In this case, Jac wanted to move towards horses in the pasture, so I asked him to move that direction; he wanted to go there-I asked him to go there-then he got a reward.