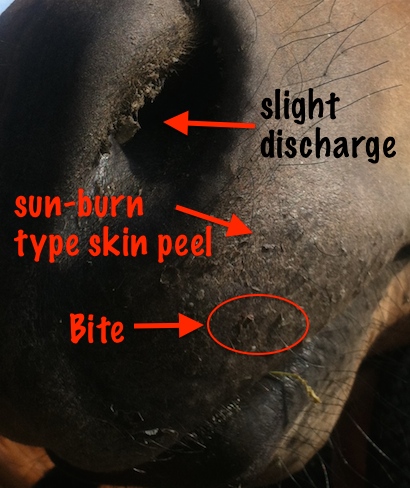 Day 3 after snake bite, with treatment

All the poisonous Texas creatures have come out to say good-bye to us! Yes, goodbye. We are packing up to move ourselves to Ohio and Pennsylvania for a few months.

I already suspect that I’m going to miss the weather here in Texas. I love the sun, blue skies and lack of mud…but some menacing creatures like warm weather too.

I realize that I could be over reacting to meeting these critters. You must keep in mind that I grew up in the state of Maine; way east and way north…where there was NOTHING poisonous.

Monday started with a rattlesnake or copperhead bite on the nose of our horse, Hope. If you watch the video you can see her eating although she is swollen. Also look at the before and after photo where you can see a huge improvement. Much of the swelling is reduced but the part of her nose that is still swollen feels very solid, like hard rubber. The skin is starting to look like it has a sunburn. It is also possible to see a slight discharge from her nose. No worries, she is already on antibiotics. Her body is still working to heal though. 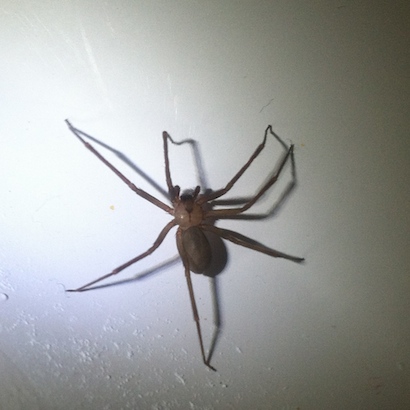 Wednesday, while I was exiting the shower, a brown recluse fell into the tub from the shower curtains. See the video…

Later that same morning my husband went to open a door in the barn and found a black widow spider…yep, it is in the video.

People who have grown up around these things seem to be more comfortable, or at least more accepting, of the idea that these things are nearby. Once we have spotted them I am ok with taking photos or video…it is the nasty surprise that I don’t like.

After the snake bite our horse is noticeably jumpier now but I think I might have her beat!

Black widow waiting in the barn

Check out this video where I managed to capture video of several of these creepy-crawly things!