Orphaned foals: From Milk to Grain 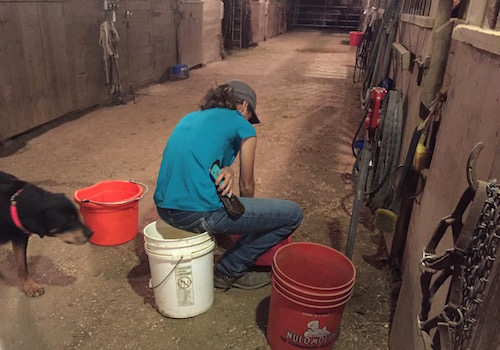 This photo shows how I have spent much of my time since adopting Presto and Justice. There are three things to notice here:

#3-the dog is circling around hoping I spill some milk (dogs, chickens, everyone loves this stuff)

Thankfully the end of the milk stage is in sight! I don’t mind mixing the milk (I think it smells like cake batter ice cream from Cold Stone Creamery) but I am excited about seeing their appetites for hay, grain and grass increasing. It means they are healthy and growing.

Along with the milk they have been given free choice foal pellets. The pellets are labeled for use from two weeks to three months of age and contain every thing the foals need in a pellet form. At first the boys ate between 1-2 pounds per day. The minimum they should eat is 1 pound per 100 pounds of foal. As they have grown, so have their appetites and they are now willing to consume almost as much as you are willing to give them. I contacted the company to be sure ‘free choice’ was ‘free choice’ as they were eating A LOT, around 12-15 pounds a day between the two of them. I was told that if they pass 3% of their body weight I could consider limiting it. Good news for the foals is that means a 300 pound foal could eat 9 pounds. These guys can really eat! They are clearly hitting the minimum of 1% body weight. 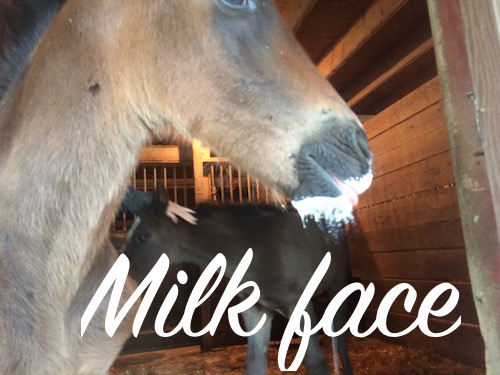 They have eaten out of buckets for the majority of their lives and if you put it in a bucket they will check it out. Hay in a bucket=yum. Hay on the ground…not so much. The funniest part about this is when I put them out where there is grass. If I pick grass and put it in the bucket they dive in…while standing on grass. Justice has discovered that grass seems to be everywhere (although he likes it when I do the work of picking it) but it took Presto longer. He would just stand waiting for me to refill the bucket. He has finally noticed it seems to be on the ground too.

The nice thing about where we are right now is that nothing is wasted. The dogs are on standby to clean up any spilled milk and the chickens hang out under the grain feeder. Presto hasn’t quite figured out that keeping his lips closed while chewing makes the whole system work better.

Up next we have clipping and leading. Justice has a hair coat fit for Antarctica and now that I have my pretty halters that you guys picked out I am ready to teach them to lead.