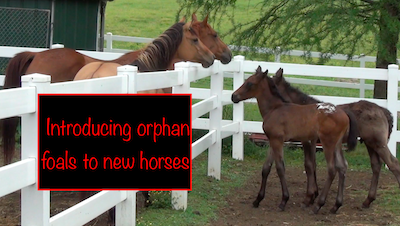 There sure is a lot going on in this video!

Willow, the dun mare at the beginning is surprised by seeing foals. She hasn’t been around babies since she was one so you can see a curiosity and almost a concern/fear with her body language. She was ready to run.

Jackie, the next mare in the video, has had two foals and you can see excitement and curiosity. She has had her own foals and has been out in pastures with other mares and foals.

The foals themselves are interesting to watch. They are interested in looking at every thing and aren’t especially drawn to the other horses. They are taking all of it in.

Justice, the stockier foal, was with his mom for over two weeks and was likely out with other mares and foals. Presto, the appy was only with his mom three days. I found it interesting that Presto didn’t do the ‘baby talk’ with his mouth for several days while Justice did immediately.

You can see that the foals get more comfortable and start to run and play more while still sticking close to each other. I’m so glad they have each other through this time. I expect that in the future I will need to wean them from each other, much like they would have been weaned from their mothers, but right now they need the security each offers.

Just after the 2 minute mark something very interesting happens. Willow, who still isn’t sure about these creatures, has a conversation with them. With her head over the fence she alternates pinning her ears at them, in my opinion what she is doing is asking them questions. She is trying to judge their reaction; do they stand their ground? Do they threaten back? Do they run in fear?

Presto’s reaction shows exactly why theses motherless foals should not be turned out with adults yet: he does nothing. Presto didn’t learn to run when threatened by other horses. He hasn’t been moved out of danger by his own mother and learned to identify danger. He simply does nothing. He doesn’t know how to read this body language.

I am glad they will have the chance to learn how to read some of this from over the fence. They will eventually be turned out with adults and I want them to learn to move when nipped…Willow might be the one teaching them that over the fence.

The next video clip is almost MORE interesting! Justice takes what Willow just did, alternating ear pinning, and tries it out on the next horse he meets, which is Jackie. Thankfully Jackie has already raised foals and ignores this ‘small talk’. I found it interesting that Justice has never tried this again.

What Justice did take away from Jackie was the idea to eat some hay. He almost immediately turns away from her (while she is chewing) and grabs the closest hay he can find. It isn’t even the freshest hay in the field. It is safe but the ‘good stuff’ is up in the barn, but what he was looking to do was to mimic this adult horse. 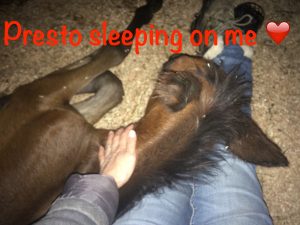 Popcorn likes babies and you can see that he is kind over the fence. He is generally the strong confident leader. Not a push over and not aggressive. In the future I hope that he will be educating the foals. He won’t be the first adult I choose though. I think the first one will be the 20+ retired TB that isn’t completely sound. He will be a gentle giant who isn’t as much like a drill sergeant as Popcorn will be. They need a kindergarten teacher first.

There is so much going on around here with chickens, dogs, people, pigs, donkeys and other horses that these foals have very full days. I feed them around 10 pm every night and they are sacked out and completely exhausted…and super fun to cuddle with!