Is a 'Quarter' horse named for the running distance or the one-quarter Arabian blood?

“There are many theories of the lineage of the QuarterHorse. The best known is the fact that this breed is so proficient in short burst of speed i.e. the quarter mile that, the name Quarter Horse came about. Many years ago, I read that this breed was so called because, in the initial bloodlines, they were one-quarter Arabian. Do you have any input on this? I Enjoy reading about your work..P.J.G.”

The AQHA has always promoted that the term “Quarter” refers to the distance, a quarter of a mile, that was popular for match racing with the early ‘Quarter’ horses.

You question about the bloodlines is interesting though. On the surface your 25% Arabian would fit (loosely) with the idea that the breed was made up from breeding Indian ponies (Spanish Barbs) to Arabians, adding in Thoroughbred and mixing in some mustang. But how would you figure out the percentages? 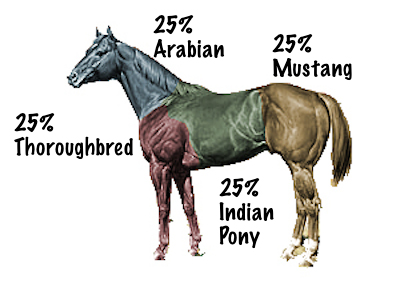 However, can you imagine the nightmare if these hard numbers were argued about? For example, I would ask the question: Where did the mustangs come from? Aren’t Thoroughbreds descended from Arabians so the Arabian blood should be a higher percentage?

You might be correct on both parts- at least if we look at it in general. I found a wonderful article on the AQHA Breed History that goes into quite a bit of detail. I suggest you read it if you want the full account.