Horses mutually grooming each other…do you let your horse groom you?

When horses are turned out together it is often possible to find two horses mutually grooming each other. This usually involves two horses standing in a way 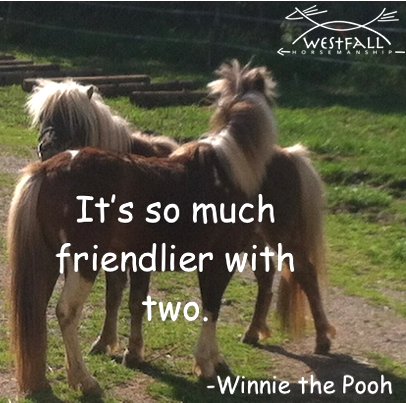 that they can both scratch each others withers at the same time. One horse generally starts the scratching and the other horse seems almost unable to resist the urge to return the favor. Is this where the expression, “I’ll scratch your back while you scratch mine” came from?

Horses often start by scratching each others withers but will move up and down each others body, not only rubbing with their strong upper lip but also using their teeth to both scratch and to gently nip.

It is always interesting to watch two horses scratching like this to observe how they interact. Many horses seem to both agree on the amount of pressure, while others will increase the pressure and nipping until offending the other horse who generally leaves. Popcorn is always happy to scratch others but won’t allow for the biting to escalate. Jac wanted to scratch others but generally tended to add some ‘testing of the boundaries (he is a stallion) and frequently offended his scratching partner. Newt is in between…he will scratch (or lick) other horses but can get a bit pushy during the session also.

I have taught Newt that scratching humans is off limits…but I do think it is funny when he scratches other things…like the saddle pad, as shown in the video below. I also added a shorter video from a different angle showing how Newt progresses from rubbing the saddle to biting the saddle…the saddle doesn’t correct him or leave like another horse would, lol.

Often when a young horse is being groomed by a human the horse will also turn and try to groom the human back. I have seen some people who allow this, some who hold out their hand for the horse to scratch and others who teach the horse to enjoy the grooming without returning the favor to the human. Which do you encourage?