Horses in the military; a rider’s last journey-the caparisoned horse 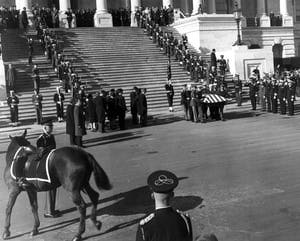 A black horse being lead in a funeral procession is one image that was burned into my young horse loving head. I imagine it was largely due to my fascination of all things horses but it was also due to the deep emotions of the adults around me combined with the ceremony and tradition. When I was older I learned that these were images from the funeral of President John F. Kennedy.

The tradition of a single riderless horse with boots reversed in the stirrups symbolizes a riders last journey and suggests that the solider is taking one last look at his family. The custom seems to have origins around the time of Genghis Khan when a horse was sacrificed to serve the fallen warrior in the next world. Thankfully for horses everywhere the custom of sacrifice turned to symbolism of a rider who would ride no more. 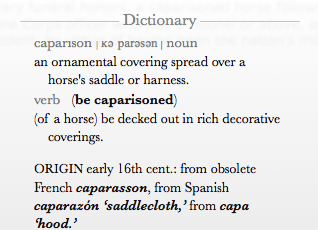 The name “caparisoned horse’ references the precise and detailed coverings which have a detailed military protocol all to themselves. It is traditional for a caparisoned horse to follow the casket of an Army or or Marine Corps officer who was a colonel or above. Abraham Lincoln was the first U.S. President to be honored with a caparisoned horse in his funeral in 1865 because of having been the nation’s military commander in chief.

I have learned that the horse I remembered was named Black Jack and he served in the funerals of three presidents; Herbert Hoover, Lyndon B. Johnson and John F. Kennedy. Black Jack was only the second horse in U.S. history to be buried with full military honors at Fort Myer. 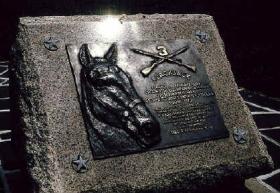 Black Jack served in the funerals of three presidents; Herbert Hoover, Lyndon B. Johnson and John F. Kennedy. Black Jack was only the second horse in U.S. history to be buried with full military honors at Fort Myer.

Much of my info came from these website you may want to visit: