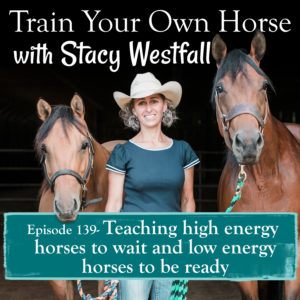 What if you…and the horse…both learned to be both?

Stacy Westfall: Hi, I’m Stacy Westfall, and I’m here to teach you how to understand, enjoy, and successfully train your own horses. In this episode, I’m discussing high energy, low energy, people, and horses, as well as the energy that blocks or disconnects riders and the energy that horses are drawn to. Let’s listen to the question.

Caller: Hi, Stacy listening to podcast number 138 in the UK today, and I’m just listening to what you’re saying, and I get the aides and all the understanding, and then I realize that a lot of it is actually about controlling myself and my energy. And when I was younger, it was always keeping my energy down so that I wasn’t revving a horse up. But now I feel that I need some way of, as I get older, of explaining that I’m getting my energy up to the horse. So any help with how you would actually in yourself, control your energy levels and not throw too much energy at the horse, but also learn how to bring it up in your body a little bit more for the horse’s benefit.

Stacy Westfall: When I’m coaching people, I wish I could snap my fingers and magically have people stop feeling something like frustration. Some of these negative feelings that we have. And what’s interesting is that I have experienced much frustration, which is why I know how my horses handle frustration, because they’ve been around me when I’ve been frustrated and I’ve learned a lot from it. And one of the things I’ve learned about it is that a lot of it is self-inflicted. I’ve learned that when I’m frustrated with something, I’m often applying some kind of pressure, some kind of expectation to myself. I’m judging myself negatively. I’m doing these different things. And another thing I’ve learned is that when I’m around other people that are doing the same things that I’m doing, it can be really helpful. So I was at a horse show this last weekend. So as I’m working on things with Willow and the sliding stops aren’t always going great, it’s easy to look around and see that other people are also having trouble with sliding stops. So I’m in an environment where I can see other people learning the same things and my brain then doesn’t run away with me, making it seem like I’m the only one having this problem. Because if I’m home alone and I’m working on it and it feels like my brain starts saying something like, you’re the only one, you’re never going to get it, you’re having this problem, this is just too much, or whatever the story is in my brain, that’s when the problem starts to seem bigger and bigger. So when I’m around, like at a horse show and other people are having struggles, I can see it. And then I can remember when I watch them struggling that this is just part of the natural cycle of growth. Willow’s learning something and every horse I do it with, it’s a teeny bit different. So what’s interesting about this is that I’ve been able to take this knowledge and take it into my online courses. And I think that one of the most powerful things that I’ve done is that in my online courses, I’ve had students submit videos of themselves learning so that other students can watch and realize that they’re not the only ones having that challenge. Just in this last editing of this–this collection course, it was so funny when I posted the walking turn of the forehand individually. All the different riders like what in the world is this? And so then when they got to see the group edited video and they’re like, oh, I’m not alone. That’s what confirms to me that it goes from feeling like, oh my gosh, I’m watching this. And I can’t figure it out to, oh, I’m in a group of other people and I can see the different challenges and I can see how the hotter horse has a different challenge than the colder horse and all these different riders that are–that are demonstrating. So I think it’s really cool when you can put yourself into these situations so that you can then know that your energy requirements, when you’re asking your horse to do something, are kind of coming from a clean place. Like, oh, I can see that a horse like Gabby needs to be held accountable. I can see another rider struggling with that. I’m feeling a little bit more comfortable bringing up my energy with that kind of a horse. So if you want to see any kind of examples of this, I’m actually putting a link in the show notes and you can go watch a free video that’s 23 minutes long of several of the students in my course that are riding their own horses at home and I’m giving feedback. And what’s really cool is it’s talking about bending and counter bending and steering. And by doing this, if you go watch it–totally free–you can see which horse and rider you identify the most with. And there is a horse and rider in there that I say, you’re not ready for this course. You need to go back and do the other one. And there are other ones in there that I’m like, this is what you need to work on, but you’ve got enough control. You only need to be at a B- level. You don’t have to be at A+ to move on because that A+ comes as you move on. So in those videos, you can actually see an example of what the shoulder control should look like before you move on to collection. So like I said, I’ll put a link to that in the show notes and it’s over on the collection and lead change course underneath the title, Am I Ready? I think putting yourself into these situations where you can take the stuff that I’m teaching you here on the podcast and look for visual examples of it and check in with yourself and say, hey, was that horse that I was riding when I was younger, was that an actually hotter horse? Higher energy horse? And now I’m riding a naturally colder horse, a naturally lower energy horse? Which part of this came as me changing as a rider? And which part of this came because I changed horses? And then what would it be like to be a rider who knew the answers for both? Thank you for listening and for submitting your questions. I’ll talk to you in the next episode.