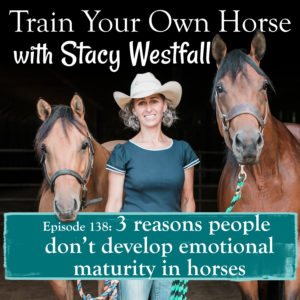 Do you think horses can be taught to be emotionally mature? What would that look like? Can you teach a horse to ‘help you out’? Or do you expect things will always feel ‘manual’ with your horse?
In this episode I share my thoughts on emotional maturity and the three reasons people don’t teach it.
(Spoiler alert: here are the three answers)
The main reasons people don’t do it are:
1) they aren’t aware its an option
2) it is repetitive
3) repetitive is a bit boring

But it is all worth it when you get to say, “Yes!” to your horse and you’re really excited they volunteered!

Stacy Westfall: Hi, I’m Stacy Westfall, and I’m here to teach you how to understand, enjoy, and successfully train your own horses. In this episode, I’m going to explain how I teach my horses emotional maturity, how you can teach your horse to help you out, and why more people don’t do it. Emotional maturity is another way of looking at something I’ve talked about a lot on the podcast, which is elementary school, high school, and college-level training with horses, and built right into there you can kind of hear emotional maturity developing. If you think about the difference between elementary school, high school, and college, it is very cool when you start looking at increasing your horse’s emotional maturity, because what will happen is that the horse will begin offering you things that you’ve been practicing. And this is drastically different than you making it happen, so can you hear how in elementary school, if you’ve been around young kids that are in elementary school, you can kind of play games, but you kind of almost are like kind of getting it to happen and you’re kind of the responsible party there. It’s rare in early elementary school for the children to be spontaneously doing things. That’s something that they learn as they get older. And then we hope to see more and more of that, you know, maturity coming in high school and then college and it’s a lot the same with horses. It’s the idea that as these little humans learn, they begin offering what you’ve been practicing and rewarding them for. And horses are capable of this. But very first, you must believe that a horse is capable of this type of thinking. If you do not believe that your horse is capable of becoming emotionally mature to the point where it can help you out in a positive way, then you actually won’t be able to teach the horse the lessons in a way that allows the horse to be a part of the conversation. Don’t worry. I’m going to give you some examples of this. So what I mean by this would be that if you don’t believe something is possible, you are not very likely to set up the situation where it will happen. So an example would be a rider that allows a horse to do certain tasks, but with resistance. So the rider accepts a certain level of resistance. Let’s call it an elementary level of resistance. And so you can kind of get it done, but it feels manual. I remember driving a stick shift vehicle and so, manual vehicle. And so when you have manual mode on your–your camera, when you have these manual modes it’s different than automatic. Automatic–when you’re riding a horse and it feels really automatic that usually a horse that’s in upper high school or college. Feels super smooth, feels automatic. The early stages, elementary school with horse and typically little humans too, feels a little bit more manual.

Stacy Westfall: I want to tell you a couple other places where I’ve seen this come in because I love giving out examples. So a couple of the different students in my online classes, one student came to me and she was restarting a horse that had a rearing issue when it would go into a lead departure. So she sent me videos where the horse was, you know, she’d go to ask it to lop off and it would throw its head up and it would pop its front, end up off the ground, lose forward motion. And so this is kind of a frightening thing for many riders. And so it was like, where do we start? It was so fun to coach her through this. And one of the main tools that I gave her for doing this–there were a lot–but one that was really critical for the–for what I’m about to highlight, was ground driving. And I had her ground drive and I didn’t just have her do basic ground driving. I had her ground driving and loping the four-leaf clover pattern ground driving. And then it was so cool because she had answered all this horse’s questions over and over and over again, ground driving, where she was using the reins and she was using a whip that represented her legs and she was using her voice cues and she was doing this and the horse would ask questions and she could answer them in a safe environment. And over and over and over again, she kept answering these questions. And then what was super cool is when she got on the horse and went to ride off and went into that lope, and when she felt hesitation, the horse picked up the slack and continued on. The horse wasn’t 100% in manual mode. The horse was like, I know the answer here. I know the answer here. You’ve been telling me the answer here time after time after time. Here’s the answer here. So when that rider felt that wobble of doubt, the horse didn’t react to it because the horse wasn’t hard wired in manual mode. The horse was like, I totally know what we’re doing, because you’ve been telling me this over and over again. This is no different than Mini Mocha turning and going like, swimming pool? You’ve been rewarding me for swimming pool. So, swimming pool? It’s the horse knows the answer because you’ve given it the answer. And it was so funny because the rider was like, how did you do that? Like, I didn’t do that. You did that. You trained your horse to be able to offer you the correct answer where you could just say yes and let it happen. And it was so cool to see that she was able to do that with her own horse. And it was even more fun is to explain to her that she’s the one that trained. I never touch the horse. She’s the one that trained it to do that. But she was basically just trusting the system. And then when when–when she went into that lope and she felt the hesitation in her body instead of the horse just reflecting that back to her, there were enough of her cues that were like, go forward. The horse like, OK. So even though she had doubt, the horse was had already said, OK, it was already going, it was already good. So cool. And then I have another student who’s been practicing the horse had a head tossing and kind of not great steering and a head-tossing kind of an issue. And she’s been practicing lengthening and lowering the neck and steering and she’s finally seeing the benefits of it when she goes out into exciting places and the horse gets a little bit of that energy picked up from other horses and things going on around it. And then she’s feeling those moments where the horse is spontaneously offering what it’s been rewarded for in the sessions at home. And when they start spontaneously offering that you always have the choice because it’s an offer. It’s not like they’re threatening you with it. They’re like, what about this? And you say, yes. And I really just wanted to share those examples with you, because I think it’s really important that, you know, that this is possible for you to do where you can actually do the training and you can start to see your horse offering you things that you get to say yes to.

Stacy Westfall: I know I’ve mentioned on the podcast that I’ve been editing my new course on on collection and introducing lead changes. And what’s really cool about that course is that I actually invited people into it to be the examples. I am not the primary example inside that course. There’s actually a young lady named Colleen who inside this video course she teaches her horse how to do flying lead changes. Now, mind you, her horse was one that she started and it did not know how to do flying Lead changes. And she had never trained a horse to do flying lead changes. And inside my course, you see her working through all the establishing collection exercises. And then you can actually watch her do her very first flying lead change and then you can actually watch her build from there. So she’s doing lead changes on circles and straight lead changes and all the work for establishing collection before that and I think is super inspiring when you know that it’s not just like, well, yes, I could watch a course with Stacy showing how she can do lead changes. No, that’s not what this is. This course is me showing you other students. I’ve actually got six other students outside of Colleen that are volunteering their videos so that you can watch them. If this is brand new content to you, there will be wobbles while you’re learning it. And it’s so cool that I can show you examples of training patterns and techniques where when you use them consistently, the horses will start to ask you the questions, how about this? And they’ll start volunteering things like collection and they’ll start volunteering things like lead changes and you’ll get to decide yes or no, thank you. Such a cool thing, if that’s something that you’re interested in right before this podcast went up. I went ahead and hit publish on that. So if you’re interested in accelerating your learning and learning about establishing collection and introducing flying changes, then check it out over at my website. And thanks again for listening. I hope it kind of inspired you and I’ll talk to you in the next episode.