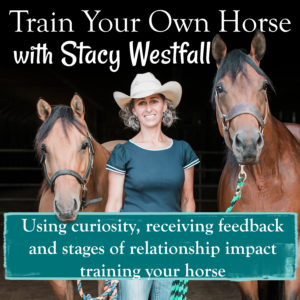 What do these three topics have in common: a confident, dominant mare who doesn’t really want to connect, a two year old that pins her ears at certain movements, and a horse that wrings its tail when ridden. I’m answering these listener questions and tying them all together with the themes of using curiosity when training, receiving feedback from your horse and how the stages of the relationship change the dynamics.

Announcer: [00:00:03] Podcasting from a little cabin on a hill, this is the Stacy Westfall podcast, Stacy’s goal is simple: to teach you to understand why horses do what they do, as well as the action steps for creating clear, confident communication with your horses.

Stacy Westfall: [00:00:22] Hi, I’m Stacy Westfall, and I’m here to teach you how to understand, enjoy, and successfully train your own horses, I’ve decided it’s time for another season of answering listener questions, and it’s actually turned out to be one of my favorite things that I do on the podcast. So first, a big thanks to everyone who has called in a question. That could be you. You could go to the website and leave your question. And I think the reason that I’ve loved it so much is because sometimes when I teach just straight the concept and the lesson, I try to use examples. But I think sometimes when you hear like the question phrased in a way that might sound like something you’ve experienced or something that piques your curiosity, then I think you can listen in a different way. And I know that when I’m answering it, it makes me want to be a little bit more creative on how to take the details that are presented and wind them together into something that–you know, a logic stream that you guys can follow and hopefully put into use. So I have chosen to tackle three questions in this podcast. So I’m going to go ahead and play all three of them right now. And then I’m going to share with you kind of the common thread that I see in all three of them and then some specifics to each one.

Caller 1: [00:01:58] Hi, Stacy, this is Christy and I have a question about my three-year-old filly. She sounds very similar to your horse, Gabby, in that she has her own confidence. But I’m having a hard time getting her to, as you call it, buy in. And I wonder how you get a more confident, more dominant horse to buy in. I’ve been consistent working on the ground with her and some light riding following your program. And I just I think she still thinks she’s the leader. And so I wanted to know, how do you get that personality to actually buy in? I don’t know if I should just keep being consistent and it organically happens from being consistent with her or if I should try some new techniques or be a little firmer. So any advice I would appreciate so much. Thank you.

Caller 2: [00:03:06] Hi, Stacy. I’ve been really enjoying your podcast and looking at some of your videos, and I’ve always loved your bridleless ride on Roxy. I’ve recently gotten back into horses and I’m working with a two-year-old mare. And I guess I am a little bit confused about when the rope means to move and when I want her to be standing still accepting the rope. So if you could touch on that. And the other thing I’ve recently encountered is when I’m kind of mounting and dismounting a barrel beside her, she’s pinning her ears at me and I’m not sure whether to correct or just continue until she’s desensitized or what exactly to do with that, I’ve tried throwing ropes over her and she’s accepted all of that. I’ve–can be up high and lead her to me and she’s OK with that. It’s the up and down that seems to upset her. And I can’t determine whether it’s aggression or fear or what is causing it or what I should do about it. So I am curious what you would say about that. Thanks for all your help. Bye for now.

Caller 3: [00:04:37] Hi, Stacy, I have a question about what you should do if your horse wrings its tail or put its ear back whenever you’re asking them to work in the saddle. Do you go back to ground work? Do you ignore it and just keep on the same path and it works itself out? Just want to know how you handle that if you ignore it or if you address it. Any advice I would appreciate so much. Thank you for all you do.

Stacy Westfall: [00:41:20] So if you are listening to this and you have a question that you would love to have answered, please visit my website and leave your voicemail. There’s an orange button on the right hand side. And a note to some of you, if you’ve left a message in the past and you haven’t heard it used, occasionally the messages come through and they’re either really hard to hear or they’re a little bit digitally kind of garbled. So if I haven’t answered your question, then please feel free to leave it again or send me an email and just mention that you’d love to have it answered on the podcast. That’s what I’m doing this season. Thanks for listening and I’ll talk to you again in the next episode.

Announcer: [00:42:05] If you enjoy listening to Stacy’s podcast, please visit stacywestfall.com For articles, videos and, tips to help you and your horse succeed.

Why do horses swish or wring or use their tails? With and without riders…