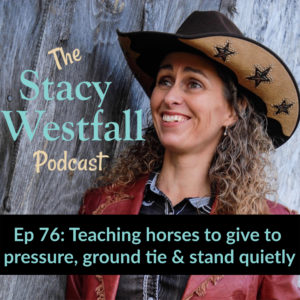 Today I’m answering three questions that I think are all related. One is about a horse that pops his head up when he steps on the lead rope, another is about ground tying and the final one is about tying with patience.

When a horse steps on the lead rope while grazing, some will step off the rope without missing a bite…while others will pop their heads up almost as if they are surprised. During this segment, I discuss the ‘truth’ that both horses are experiencing and I outline how to show the horse the more quiet answer.

Finally, I discuss teaching a horse to stand quietly. We discuss the nuances of recognizing subtle changes in a horse while it is tied and solutions for reducing pawing.

The Trail to the World Show: Episode 3