Dealing with our first snake bite on a horse… 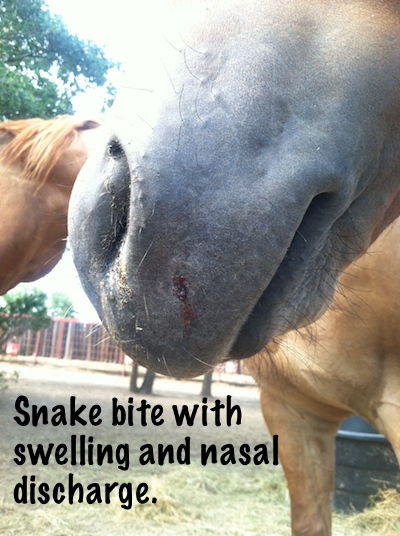 This three year old mare, Hope, is still eating, drinking and breathing normally although she has clearly been bitten by a snake. It looks like I am going to have hands on experience with something I have only read about.

My first surprise is that she seems more comfortable than I would have imagined, which is a good thing because keeping her calm is not going to be an issue. But it is still early. More swelling should happen in the next 24 hours.

Aside from being in Texas I would not have thought that she is in a very high risk area. She is near the barn in a high traffic area. There are not rocks or logs or other typical hiding places. The snake had to have chosen to enter the high traffic area where the horses and cattle are. There is no feed stored near this area and the horses clean up what is fed.

When I visited with the vets I learned a couple of interesting things. One lady was telling me that she had a kennel with 20 dogs boarded there and the back was open for air…and a snake entered. What happened to these things trying to avoid contact if possible?

My first clue about this was on a trip with my kids to a nature preserve where they were speaking about snakes. I asked about snake bites, on humans, and was told that most often the person is not given anti-venom but is observed and the symptoms are treated.

I have talked with several vets today and they don’t even have the anti-venom available. The closest vet assured me that they typically treat five horses a week…although they treated five this last weekend…not a good sign. I wish it was an option because I would spend the extra just to be safe but three vets later I guess not.

All the vets agree that we are treating the swelling and to prevent infection. They don’t exactly agree on doses and medications…interesting.

Hope is generally good with shots. She had blood drawn for her coggins test this spring as well as her shots and was fine. Not so fine AFTER the snake bite. I’m just guessing that her recent encounter with the snake has her seriously jumpy about anything that feels prickly. Just a guess.

‘Hope’fully we will see major improvement with the treatments. I will keep you posted. Prayers are appreciated.

There are many interesting articles online about snake bites, like this one. If you have one to share…please do. 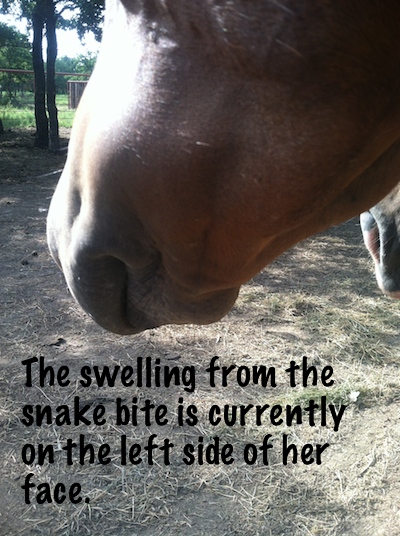 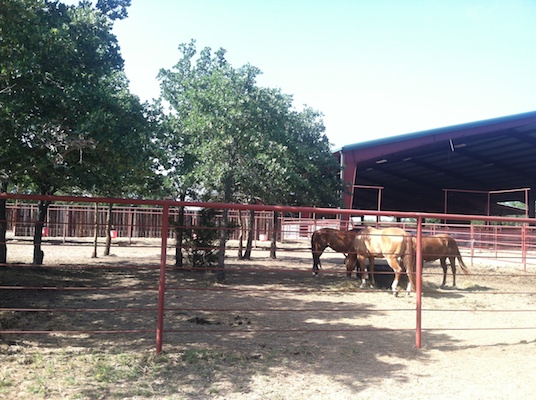 High traffic area with no hiding places for snakes

P.S.- for added fun the air conditioning went bye-bye in our van on the trip to the vets…over 90 degrees here in Texas…the kids are learning how the ‘good old days’ prior to air-conditioning were…