Hope, the horse that a snake bit yesterday, is doing much better today. The swelling is already going down and she is eating and drinking normally. She seems generally jumpier than usual and giving her the first shot after the bite was exciting. A sharp prick in the neck must have reminded her of the bite and she reared attempting to jerk away…must have been a brief flashback. She is normally good for shots and after that first time she has been fine, which is good for me as she is receiving three shots a day. 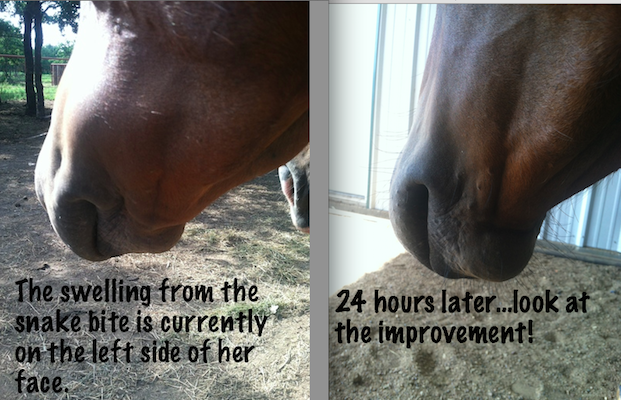 My blog about the snake bite raised some questions that I will try to answer here.

Some people asked how we knew it was a snake bite and not a spider bite. We know it was a snake bite because you can see both fang marks on her nose. this area is also known to have snakes and they are saying they are especially bad this year. The closest vet told me they normally treat about five bites a week but treated five just over the weekend. Let snake season begin!

We didn’t see the snake that bit her. The vets and the locals say it was either a rattlesnake or a copperhead. Two copperheads have been killed 1/8th of a mile from here and two more were sighted. We saw a rattlesnake resting on the road about two miles down the road. Both are around here.

I like this part of Texas because it has lots of trees, rugged rocky outcropping, dry sandy stream beds…very pretty and very snake friendly. I was just hoping with the dogs around and with all of the activity with horse, cattle and people that they would stay on the other few hundred acres and away from the barn!

I had read about putting pieces of hose in a horses nose if the swelling got to bad. Thankfully her nose didn’t swell that bad. I have a friend in Colorado who had a horse get bit right between the nostrils. She reported that the horse was struggling to breathe and that it was very difficult for the vet to get anything in the nose.

Not many vets carry anti-venom which has a short shelf life (6 months) and can vary greatly in price. I know two people that have bought it and they paid $400-$500. Other people have been quoted as high as $3,000-$7,000. I have no idea if the price varies by type of snake or availability or what. Also, it is not without risks itself including potentially fatal anaphylactic shock. The risk, cost and availability are probably part of the reason supportive care to reduce swelling and infection is the first choice.

The vet prescribed Banimine, Dexamethasone, Gentamicin and Penicillin. These are to reduce swelling and to treat and prevent infection. Click here for a link to a great website that has more info on these medications. It sounds like the treatments also vary depending on other factors like the reaction the horse is having, the types of snakes known to be in certain areas, etc.

Many people posted photos on Facebook of their own horses…wow, I’m thankful that Hope didn’t get nearly as bad. 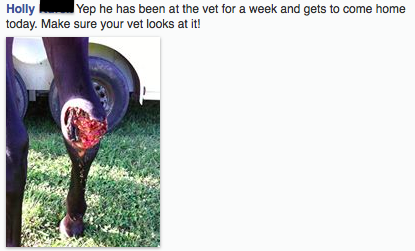 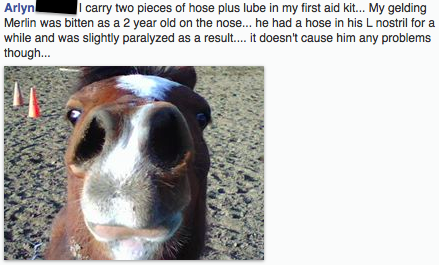 Merlin has a cute face!

From a training perspective it will be interesting once Hope has healed up to study her reactions to things. I will be interested to know if anything has changed, for example, her reaction to dragging a lead rope or hose like object. It is already easy to see that she is jumpy.

I have already learned from her. She has always been fine with shots but her first reaction just after the snake bite was to rear and try to escape. By the second round of shots the next day she was back to normal and stood well. Will she have a reaction to things dragging on the ground? Once she feels better I will let you know!