Could you have used a bosal instead of a bit for some of his training? Stacy’s Video Diary: Jac Review

“Thanks so much Stacy for your honesty about what really happens! I really enjoy reading your blogs:) Back when Jac’s mouth was irritated, could you have used a bosal instead of a bit for some of his training? Happily following you from Williams Lake, BC, Canada” -Jen 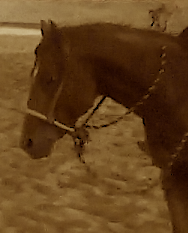 A bosal is not the same as a mechanical hackmore. Click photo to see more bosals.

I had the same thought myself. If you watch the video below, Episode 39, at the 2 minute mark, you will see that I did ride Jac a few times in a bosal. A bosal  has nothing in the mouth and is something that I am even allowed to show in, so I gave it a try.  But it didn’t work.

There were two issues here; physical and mental.

Physically, at least early on, there was still evidence that Jac’s mouth was irritated, even without a bit. When ridden his saliva was occasionally tinged with blood. I don’t know for sure if the riding irritated his mouth; breaking at the poll requires the lower jaw to slide forward. Maybe his mouth was irritated in the stall or in the run too…I don’t know for sure. I stopped poking around all the time because it bothered him and I wanted to let it heal.

Mentally, because I didn’t know if riding was irritating him…but it become a mental problem for me.

Sigmund Freud once stated, “A man with a toothache cannot be in love.”

Oddly enough, maybe the best way to say it is, I felt guilty riding him. Guilty because I could be causing him discomfort. The idea that I might be unfair in still riding him changed the way I felt about riding him. The problem with feeling guilty is that you ride like you are guilty.

When I ride I know that there is a mental connection. I am always training the mental as well as the physical horse. If I made Jac ‘push through the pain’ would he respect me for it? Would I respect me for it?  If I disrespect the horses feelings here, can I expect him to give me his ‘extra’ when it really matters?

If another similar situation were to occur I would use a bosal again. Just because it didn’t work well in this situation doesn’t mean I don’t like the tool. I like a bosal on some horses. Much like different bits have different ‘side effects’, so does a bosal. I think that riding in a bosal encourages the rider to have more ‘feel’. Some horses respond well to a hackmore but other horses find them easy to ignore. I still keep one around to use at times and the best part is they look AMAZING!