Are some horses 'unfixable'? Are all horse problems created by humans?

“Stacy I enjoy your blogs and thoughts thank you so much for what you do for the equine world. I grew up riding in open shows and for fun and decided that I would like to make a career out of training. I got my equine riding and training degree and spent some time riding under a reining pro. My ethics would not allow me to continue with my chosen profession so I got a normal job and now ride non pro. I happened across a sale with a horse raffle, I watched them start this mare and she was bred really nice. They pushed her too fast through the process since it was a show and they wanted to be riding her the next day. She bucked a lot… I mean a LOT when they first saddled her but by the second day with riding she was coming along great. Low and behold I win this mare. I take her home and start over with her and she is SUPER reactive and add that with cat like reflexes. I worked with her an entire winter on the ground and then started riding her. We had lots of good rides but one day out in the pasture a rabbit jumped out of the brush and she left, no bucking but there was no way I could stay on her. After that she dumped me several more times. I decided to start over again and went back to ground work and saw lots of improvement so the following summer I started riding again. Now when we loped she would suddenly start bucking which led to the very first stride of the lope being a buck. This was never consistent, some rides were great and others were not and she could REALLY buck. I stuck with her for several months for only one reason, I 100% feel the buck came from fear not nastiness. But the triggers were always different, some days there was no trigger, and the ground work prior to the ride was always great. I came to believe the mare had a wire in her head that would suddenly snap and I was tired and a little scared of her so our relationship would never be great.  Whether this came from genetics or being pushed too hard her first few days I will never know. I have started several since her and they are great horses. I know the common philosophy is 100% of a horses’ problems are human created but I do not believe that. Do you believe some horse are just not trainable?”

My answer may not be popular but it is what I have observed. I have come up with a set of numbers, that although they are not perfect, can be used to analyze horses as a whole…including the possibly ‘unfixable’ horses.

10-80-10 is a term I have coined to describe the natural mental state, or trainability, of the horse population; which is to say that there are 10% of horses that are amazing, 80% that are average, and 10% that need professional or medical intervention. 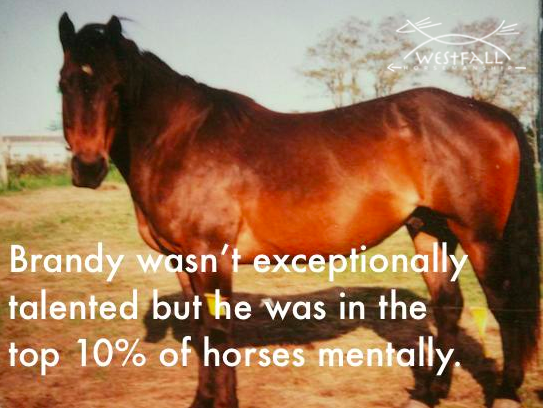 Brandy belonged to Stacy Westfall’s mother, he wasn’t physically talented but he was in the top 10% mentally and taught many children.

Lets start with the top 10%. They are exceptional. If they were humans they would be Michael Jordans of the horse world. You will see theses horses winning big in their events BUT pay attention; you will also see them at your local open show or trail ride. Even without ‘the right training’ you can spot these exceptionally great minded horses. Sometimes they even stand out MORE when they are not in professional hands because it is even more obvious that it is the horse who is choosing to be good even in tough conditions. You will see them packing kids, green and novice riders around and wonder how their ‘training’ is still there despite the inconsistent hands and mixed cues…but it is not the ‘training’ but really their great mind that you are seeing. My stallion, Vaquero was one of these rare individuals as was my mom’s horse, Brandy, that she had when I was growing up. Brandy never won any thing of note but was always our ‘go to’ horse for teaching a new rider or building up a riders confidence. Brandy was not physically exceptional but mentally he was clearly in the top 10%.

My stallion, Vaquero, was mentally in the top 10% and he also had the rare combination of being physically talented as well. He was a joy to train and I believe that he would have excelled in anyones training program. Even if he had never been trained as a reiner any horseman who saw him would have appreciated him. Have you ever known a horse like this?

The middle 80% of horses is a tougher group to analyze. Inside the 80% there is a sliding scale of trainability BUT they all have one thing in common; they are greatly influenced by the training they receive. With good training techniques, horses that belong to this 80% can look like they are one of the top 10% but with bad training or life experience they can also look like they belong to the bottom 10%. Roxy was part of this group. She was not an easy horse in the beginning. When she was a two year old, the girl who worked for me at the time actually told me, “You’re crazy if you ride that horse outside.”…and she meant with a saddle and a bridle. Unlike Vaquero, Roxy could have become insecure and scared. She defaulted to fear and required patience and repetition to learn the proper way to respond.

The biggest difference to note between Vaquero and Roxy, the thing that identified one as the top 10% and the other as the 80%, was not where they ended up, the difference was in the amount of work it took to get them there. With Vaquero I could show him something once and he ‘got it.’ There was no fight or fear even if he was confused but he wasn’t confused often. He forgave mistakes and could handle pressure. He was like training a gifted child who could simply read a book and then perform.

The bottom 10% is generally the most difficult for people to accept the existence of. Notice that I didn’t use the word ‘unfixable’ but rather I said they need professional or medical intervention. It is accepted that genetically horses can be at risk for HERDA or HYPP…but no one is talking about possible mental issues. In humans it is documented that 20% of adults have experienced mental illness in the past year…why can’t these issues happen in horses also? In humans many of these are treated by therapy, medication or by dealing with the symptoms. Are some of these possibly appropriate for horses? Maybe. In addition to the mental component I also believe that there are horses dealing with untreated physical pain that can also cause difficulty. I knew a man who was given a ‘problem’ horse and later it was discovered that the horse had an old wire segment embedded deep in his shoulder.

I have personally seen a small number of horses that I believe had some kind of brain disorder. The one ‘common’ thread that they had was the tendency to ‘snap’ for no apparent reason. I am not talking about horses that lacked training or were in unusual or trying circumstances, but rather, horses that more closely resembled humans who suffer from post-traumatic stress disorder.

I am not condemning horses that potentially belong to the bottom 10% for whatever reason; I am stating that it is important to be aware that they can exist. Not everyone is equipped or capable of dealing with these horses which is why professional or medical intervention is usually the best route. Know what you are capable of dealing with and make your decision accordingly. Some people choose to keep these horses as pasture pets, accepting that they are unsafe to ride, other people continue to look for help for the horse, and still others choose the route that was documented in the movie, “Buck“.

Have you seen horses that fall into each of the categories? What category do your horses fall into?

Vaquero had an exceptional mind and I put him in the top 10% of horses, when considering them mentally.