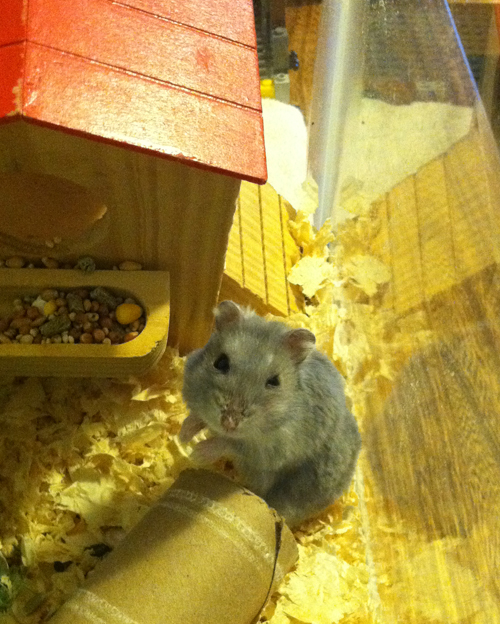 As if having to worry about Vaquero wasn’t enough my son’s Hamster (Hammy) took a turn for the worse this week too! I’m not really sure what happened, we know he felt fine around lunch time because I remember talking to Jesse during lunch about how the hamster should be sleeping during the day…not running in his wheel (being nocturnal and all).

Somehow by 3 o’clock in the afternoon Nathan found him huddled and shaking in the corner of the cage. He looked really bad. Nathan yelled for help and I ran in and picked the little guy up. He was cold and wouldn’t open his eyes. Nathan wanted to know what was wrong and where we could take him for help.

I felt so bad holding the little guy. I decided to try warming him up (the house was the same temp as normal) while I called the vet. Yes, I called the vet for the hamster. That is when I learned that only one vet in our local practice sees hamsters and she wasn’t in. If she had been the trip was going to be $30. As she was not they said we could maybe try the emergency number…$100 vet call (did I mention Hammy was originally bought for $29.99?).

I hung up the phone to consider my options. This is where I need to make an important point. I was holding a $30 hamster in my hand and would have been (without a doubt) on the way to the vets had she been in! The point is, we get attached to these guys! Horse, dog, cat, hamsters…

So while considering I tried getting him to drink something. He kept his eyes shut and would just push the bottle away, not good. But he didn’t like his feet getting wet so he would lick them off. So I changed tactics and began wetting his feet. This did two things: really annoyed him and got him to drink.

I don’t know how long it ‘officially’ takes to re-hydrate a hamster but my guess is about 20 minutes to a half hour because in that time he really came around! (This entire time Jesse was reading hamster websites out loud to us). When he started doing his business and even nibbling at a treat we were relieved.

Not to be pessimistic but I figured the sudden turn for the better would be followed by a sudden, well, death overnight…but thankfully I was wrong. As you can see Hammy is feeling pretty good and that was three days ago!