Should your horse wait for instruction or act on his own? 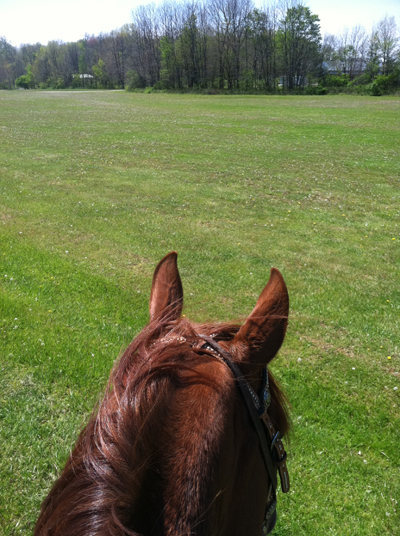 I took Popcorn riding down the road today and it got me thinking about a certain comment someone once made. The comment was directed at me and was said in public…but not TO me.

The short version is something like this. I had just finished teaching about the importance of groundwork and teaching the horse to have ’emotional control’ the idea that instead of just reacting…they stop and think or wait for instructions.

This other clinician then spoke right after me and made the statement that he didn’t want his horse to wait and ask if it should run if a bear were to come running after it. Sure, he didn’t point me out, but it was pretty obvious he was tearing apart what I had said.

I thought about making the comment at the time that hopefully as his horse left the scene he (the rider) would be able to cling on…cuz if he got dumped by that horse he was going to end up as bear food!

The real story of what I want was illustrated by Popcorn today on my ride. I was enjoying the sun and looking around but I was fairly relaxed and honestly, being a little lazy as a rider. That is where a well trained horse can step in.

Popcorn politely ‘pointed’ to something I had not noticed. He simply looked in a direction with focus and, without leaving the path I had him on, he made it clear to me there was something of interest. I looked and noticed that our ride had set some horses in a far off field into a frenzy of running.

I remember growing up that the horses I rode did not have the ’emotional training’ that Popcorn does. If this same thing had happened, actually it did, then most often the horse I was riding would have become excited and thought about joining in with the frenzied running! Too bad for me as the rider!

Thankfully my horse understands both emotional control AND the idea that I will listen to what he has to say. Nope, he is not a robot…but I am also less likely to be left in the dust as he makes his own ‘natural’ decisions.