Disappointing…but the right thing for the horse. 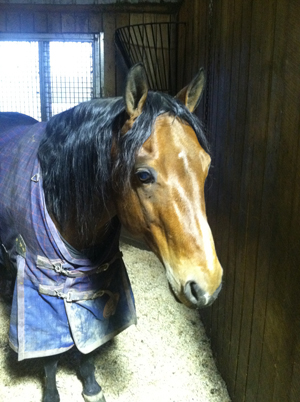 I should be writing this post from Lexington, Kentucky…but I am not.

I should be at the Kentucky Horse Park preparing to show Vaquero in the freestyle reining class at the Rolex…but I am not.

I have mixed emotions about not being there. I was really looking forward to showing him. I had prepared him for it by taking him to the Dixie Nationals in February and designed that routine to ‘put money in the bank’ for the Rolex.

Then I used the demos at the Equine Affaire in Ohio for further preparation. He rode great just this last Thursday and Friday.

The short story is that on Sunday night when he came in from being turned out with three other pasture-mates he wasn’t right. He had the appearance of being slightly drunk, complete with being slightly uncoordinated and easily off balance.

He appeared to have the symptoms of EPM although it was too sudden (I hope) for that which seemed to point towards some type of injury. But he had no marks; no mud on his blankets to show that he had slipped or been kicked or reared and gone over backward…or any clues.

We have been treating him and he has been improving although he is still not quite right. His head tilt to the left is still there although he has lost the slightly drunk look.

At this point I just want my cute pony to feel better!