When training a horse; figure out the theory and then apply it to other areas. Bow, lay down, lunge

“Hey Stacy! I have a question! I taught my horse to lay down with a scratch on the withers (or by picking up his left leg like I’m going to clean his feet & turning to face towards him if he’s being stubborn!)

I did first teach him to bow, but now anytime I do anything with his leg he instantly lays down. 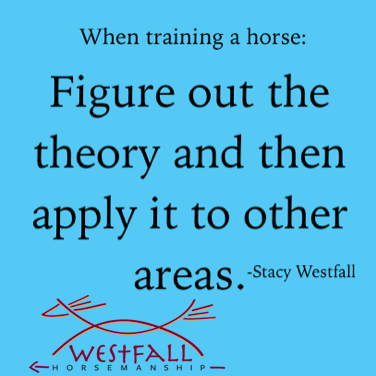 Some of the best advice you will ever receive on horse training is; figure out the theory and then apply it to other areas.

Another way to look at it would be; if he gave you the wrong answer in another area, how would you handle it?

For example, lets say that you were lunging a horse and after traveling two times around you on the line he stopped and turned in to face you. Remember, you didn’t ask for this move. The horse just decided it was a good idea. He probably got that idea from being rewarded at one time for turning to face you. What would you do?

If it were very early on in the horses training, or if the horse had a habit of dragging humans away, or if you had been really working hard on getting this particular horse to turn and face you…you might reward this spontaneous move even if you didn’t ask for it. But….

If you reward this very often, it is very likely, that the horse will try more and more frequently to turn and face you and eventually ‘sending’ him around you will become almost impossible.  (I have had this combo show up at many clinics)

During the early learning phase I often reward the horse for having an idea, particularly if it is something I have been working hard at planting a seed for. If you watch Stacy’s Video Diary: Jac- Episode 26 it is easy to see what ‘seeds’ I have planted and how they are growing.

The short answer to your question is; if the horse does something you don’t want him to do then you need to discourage it. If he spontaneously turns and faces you when lunging then at some point you will need to correct him by asking him to continue on.

That ends my ‘theory’ lecture…now onto the nuts and bolts of how to get this to work.

For your bow or lay down pick a cue that you want to stick with and discourage him if he tries to lay down for anything else.  It is preferable if the cue to lay down is also something that can be done to also annoy if the horse ignores it. For example, scratch could be your first cue and tapping could be the annoying cue if he ignored the scratch.

One reason I use a rope during the bow training is because it allows me to skip this problem you are running into. My horses don’t associate the bow with me cleaning out their feet because it looks different. The other reason I use the rope is because I have trained some uncoordinated souls that seemed like they might fall over on me while learning, lol.

The most difficult part for you will be ‘discouraging’ the behavior you worked hard to get. Pick how you will discourage him, it could be verbal. It could be poking him in the belly (my kids poke each other all the time-it is annoying but not painful), you get the idea.

Your horse is really just trying too hard, much like a dog that has been trained to do three tricks and is now doing them all spontaneously looking for a treat. It is a great thing to have such a willing and engaged animal but it is still ok to refine the communication.