When do you put leg protection; leg wraps, bell boots, etc on your horses?

“Stacy-Awesome, awesome Jac is going so well. Love his cute lead departure out of the turn. I noticed you choose not to put boots on Jac, even with shoes on. Is this because you are allowing Jac to learn at his own pace and find he doesn’t loose his balance etc?-Janette”

I do eventually use boots on my horses. I base my need for boots on a couple of things; intensity of work and likelihood of the horse stepping on or bumping himself.

I think of it a bit like do with my kids. If I think about sending a kid out to play soccer in the back yard I don’t pad them all up. As the child become more intense and the speed increases so does the likelihood of collisions with other kids, etc. so the more they get padded up to play.

If I am going on a casual ride or if I am doing low intensity work I often skip the boots. Exceptions to this are when I know the horse may have an issue like over reaching, etc. Then I put boots on. 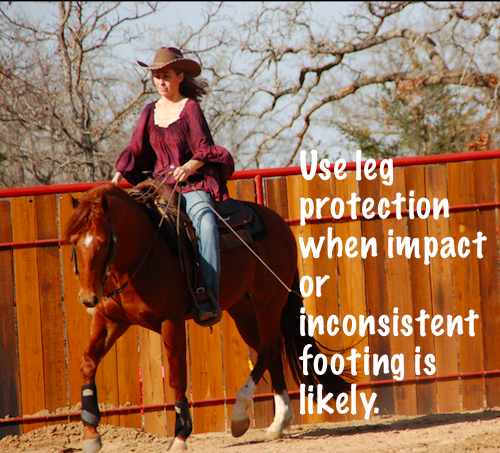 Weaver Leather has a new line of leg care, Jac looks good in them!

If I am riding on inconsistent ground I will often put boots on much like I would put on hiking boots to go hiking.

Jac was barefoot in the front and had sliders in the rear. He was in a flat, sandy arena where I could happily run around barefoot myself. His level of work was just beginning to border on me using boots but…
I often leave my horses barefoot in the front and skip the leg protection during the early spin training. This changes as they gain speed but early on I want them to learn where their feet are…including if they step on themselves.

Back when I trained for the public I would have people who brought their own boots and asked me to use them always. And I did.
I noticed that often these horses seemed to drag their legs across each other and step on their own feet more than their ‘unwrapped’ buddies.

Jac’s worst leg injury to date came from over reaching and tearing a chunk out of his heel…while he was turned out.
Goof ball.
I am hoping he remembers where all four of his feet are next time…and when I ride him. I don’t put boots on for turnout. I have had horses with special shoes on that required me to keep bell boots on even during turn out. That is a special case thing.

If you watch the last video posted of Jac where he is running and stopping you will notice he has on bell boots and leg protection including padding up the inside of his knees for when I spin. Full front leg body armor!

Jac is not stopping quite hard enough yet to require skid boots in the rear. That will be the next boots that are added.

Here is the video with Jac wearing his leg protection.

Here is the video that caused the question to be asked: