What you would recommend for de-icing walk ways for horses?

“I was wondering what you would recommend for those of us in cold weather states for de-icing walk ways for horses. My horse is stall boarded with turn in and out. The path between stall barn and pasture is concrete and ices up in the winter. I’m just curious what kinds of things people use that are safe for their feet.”-Becky G. 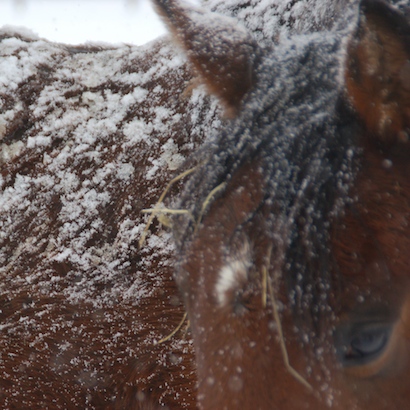 I generally have used some form of dirt like sand, gravel. I had an indoor arena so I always had access to sand. The idea is that sand adds some grit and the dark color attracts the sun.

When I have been in a location and dirt wasn’t available I have used bedding from the horse trailer or a nearby stall to reduce slipping. It isn’t as pretty but the slightly dirty bedding often works better because it doesn’t blow away as easily. Also if there is moisture in the sawdust it will freeze to the ice which stops it from blowing away and gives it grip.

For places that I was just leading the horses I have used salt also. In theory we give horses salt blocks, so using a safe form of salt shouldn’t be a problem if the horse chose to eat some. You could talk with your farrier and see what his thoughts are concerning your horses feet. If the horse is being lead over the area vs. standing in salt all day I would guess the farrier would view it differently.

I have also known people who put something down before the area ices up such as hay, straw or gravel. The idea is that when the surface freezes the texture or lack of smooth surface will provide some grip.

Whichever method you use be sure to test it with your own feet. Sometimes adding something on top of ice, like straw for example, actually makes it MORE slippery.