What material would you use when building your own round pen for horses?

“I’m looking at building a round pen for starting and working my horses. I have seen ones with full wooden sides, some with boards, with shade cloth for sides and even some with electric tape. Which would you recommend? I’m not keen on the tape type incase the horse goes through it.”-Laura R.M.‎

As you have noticed there are quite a few options when it comes to building a round pen. Taking a look at how you are going to use the round pen as well as the climate might help you make your decision. 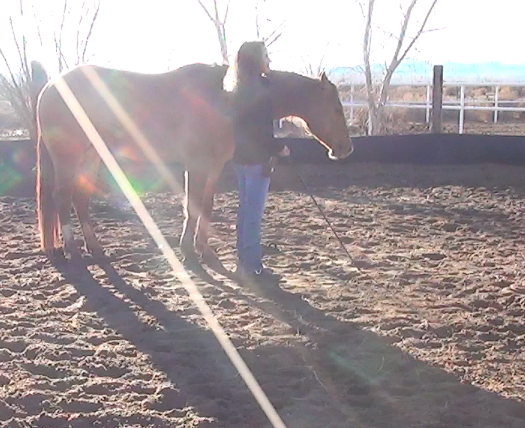 While I was training in Ohio I had a round pen made from the metal panels. You can see this round pen in the Stacy’s Video Diary: Jac series. The reason I chose to use this type of round pen was because I knew I was going to need to use it in my indoor riding arena when the weather was bad outside. I dreamed of having a covered, enclosed round pen but it was never in the budget. The advantage of having the portable panels was that I could also move the round pen to my outdoor arena when the weather was good.

The biggest advantage for me was that I could take the round pen down when I needed to drag the footing. I have had the opportunity to use a few enclosed round pens and the one issue that I have seen was when people don’t plan for how they are going to maintain the footing inside a small pen. Without proper maintenance the footing can get extremely packed and it can also become very sloped, like a bowl, which makes it more likely for a horse to trip. Be sure that the pen has a gate large enough for a tractor or drag or whatever equipment you plan on maintaining the footing with.

I have also used round pens with solid walls half way up and all the way up. One advantage of the solid walled round pen was that the horses were very focused as they couldn’t look out. One disadvantage was that no air could get in, during the summer months it was like an airless desert. The pens that had solid wood bottoms and then bars above allowed for air movement.

The round pen in this photo was at one of the horse motels we stopped at along our trip. It was in New Mexico and they wanted to maximize airflow so they used the mesh wire but they also wanted to minimize the sand blowing out so they added a row of industrial belting, similar to a rubber mat, as a lower barrier. After using it for awhile they decided they want to add another layer of the belt and they think it will still allow enough air flow. Consider how you want to use your round pen, what type of footing you will use and how you will maintain it, and what materials are available and will hold up well in your climate.

Have you built your own round pen? Where do you live? What materials did you use? Are you happy with the results?