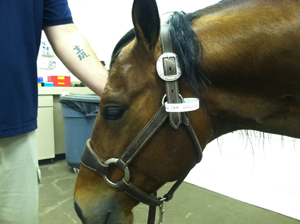 Vaquero and I drove to Kentucky last night for an early morning vet exam to figure out what has been going on with him. I was glad to see that he unloaded from the trailer ride last night with the same level of discomfort he was experiencing at home-at least the ride had not aggravated anything. It also seemed like a good idea to break up the drive over two days for the same reason.

The staff was great even last night as I checked in around 10pm. When I arrived this morning Vaquero looked comfortable and I found Brent, who works with Dr. Reed, already gathering information on Vaquero. He told me that the exam would begin soon and shortly after that took me (and Vaquero) to meet Dr. Reed (what a nice guy!). 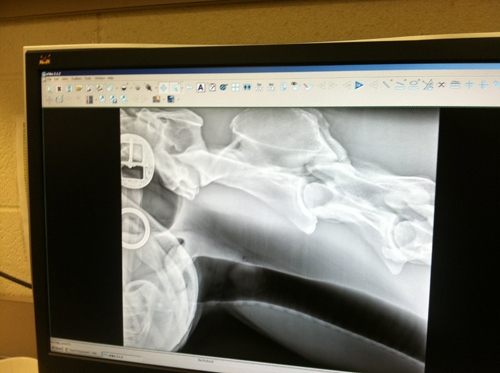 The exam went well, or whatever you want to call it when your horse doesn’t exactly look right… and soon Dr Reed had us headed to x-ray. He discovered in the first set of x-rays that there is some arthritis and is/was concerned that this is the source of the problem. He explained that Vaquero could have simply been playing or running and slipped in the pasture and aggravated and already existing condition. He said it is similar to a human who has back issues and then moves wrong or slips and instantly experiences sharp pain. I (Stacy) have arthritis in my neck and have had back issues my whole life so I know what he is talking about. For most of my 20’s it was normal for me to be walking along and then have such a pinching in my hips that it would almost drop me to my knees…then I would come up ‘lame’ and limp along. Anyway, back to Vaquero. 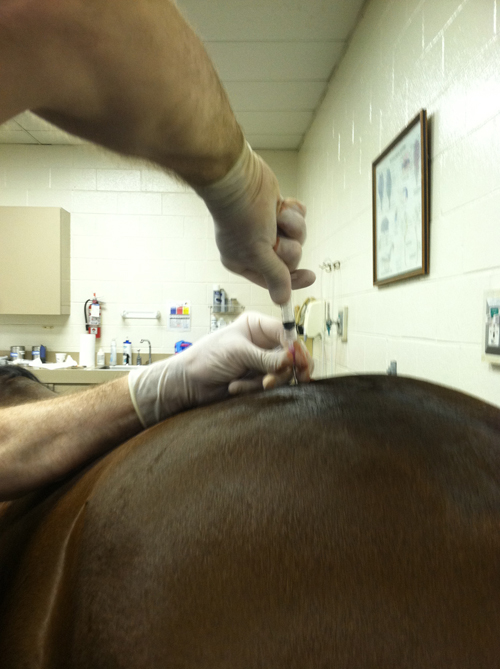 Dr Reed also wanted to test for EPM which required a spinal tap. His thought there was that it would be nice to rule it out as it would be unfortunate to decide it was all in his neck and leave something like EPM sneaking under the radar. I was happy to learn that the tests for EPM have improved over the years and are more accurate than they were. Those results will not be back until tonight.

In the end we talked about options and I have chosen a three part thought process. We will go home and wait on a few more test results and begin a month of rehab. Then depending on his progress it will be decided what to do next. Some options are injections in the neck, injecting dye for contrast to get even more specific answers to if his spinal cord is indeed being pinched, and even possible surgery.

I told Dr Reed that with Vaquero only being seven I wanted to take the route that had the highest likely hood of him reaching a happy, comfortable twenty seven. So that is the path we are on. Keep him in your prayers and I will keep you posted.